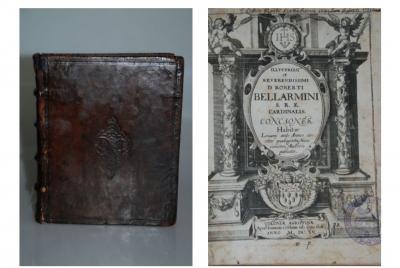 ROME -- Carabinieri from the section for the Protection of Cultural Heritage (TPC) of Udine have returned to the Pontifical Scots College a 17th century book entitled ‘Conciones, habitae Louanij ante annos circiter quadraginta ...’ (in English, ‘The sermons were held at Louanium about 40 years ago…’)  by the Jesuit theologian Roberto Francesco Romolo Bellarmino (Montepulciano, 1542 - Rome, 1621), Cardinal, Saint and Doctor of the Catholic Church. The historic item was recently sequestered by the Carabinieri department which specialises in the prevention and repression of crimes committed to the detriment of cultural heritage.

The tome was returned to the Rector of the Pontifical Scots College of Rome, Fr. Daniel Fitzpatrick, by the Commander of the TPC Unit of Udine, Maj. Lorenzo Pella, at the end of an investigation coordinated by the Public Prosecutor of Reggio Emilia and undertaken following web monitoring aimed at searching for illegally marketed ancient books. The volume had in fact been purchased online by a private resident in the province of Reggio Emilia and had immediately aroused the interest of the military as it bears distinctive signs in Latin relating to the college of St. Peter in Glasgow.

The investigations were carried out quicky and effectively with collaboration directly with Police Scotland and the Dutch Koninklijke Marechaussee, allowing the TPC Carabinieri of Udine to speak directly with specialised archive staff in the archdiocese of Glasgow, who were able to identify the stamps of the tome as relating to the aforementioned British college. Further archival research revealed that the tome had been donated in 1880 to the college by the protempore Rector William Gordon and then illegally removed in an unspecified period prior to the first cataloguing of 1981.

The volume, centred on Christian doctrine and on preaching in Leuven, in Flemish Brabant, belongs to a nucleus of similar works by Cardinal Bellarmino preserved at the Pontifical Scots College and has been recognised as “of particular importance for the College, for the Diocese of Glasgow, for the Catholic Church of Scotland as well as for the whole Scotland as a whole.”

The buyer, a lover of Mantuan history, had bought the volume from a Dutch bookshop through an e-commerce platform and underwent a preliminarily investigation for the “purchase of things of suspicious origin.” Following the outcome of the criminal proceedings, the proceeding judicial authority ordered the release of the volume and its return to the ecclesiastical body owner through the Pontifical Scots College of Rome, representative of the Catholic Church of Scotland in Italy.

The precious and rare historical volume will therefore soon be restored into the collection of the Scottish Archdiocese after an absence of over 200 years, thanks to the investigations carried out by the Carabinieri who not only work to bring cultural assets illegally stolen back to Italy under the principle of " restitution of culture,” but thanks to the fruitful collaboration with the competent foreign authorities, also contribute - through the so-called" culture of restitution "- to the repatriation of foreign cultural assets illegally present in the Italian territory. 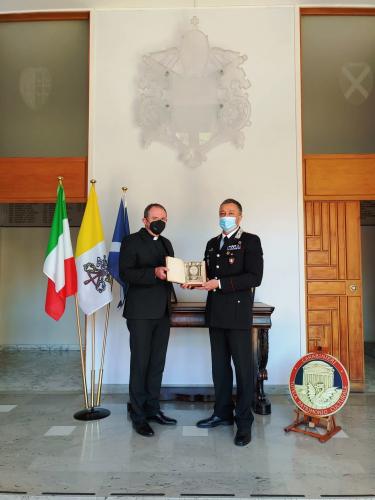