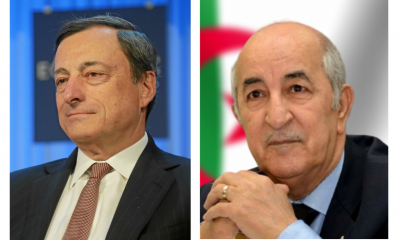 ROME – In light of the need to reduce dependence on Russian fuel, the governments of Italy and Algeria have agreed to increase bilateral cooperation while the Italian multinational Eni has increased its gas imports from Algerian state company Sonatrach by up to 9 billion cubic metres of gas per year, although the change will not be immediate, business sources said.

Prime Minister Mario Draghi and Foreign Minister Luigi Di Maio went to Algiers with the aim to move away from Russian fuel supply as quickly as possible, and thus to stop financing the country’s war on Ukraine. On Monday they signed a "declaration of intent on bilateral cooperation in the energy sector" with their Algerian counterparts.

"I announced that Italy would move quickly to reduce dependence on Russian gas,” Premier Draghi explained. “Today's agreements are a significant response to this strategic objective, others will follow. The government wants to defend citizens and businesses from the consequences of the conflict.”

The deal between Eni and Sonatrach will mean Algeria now supplies Italy with around 21 billion cubic metres annually, making it the peninsula’s second-largest supplier behind Russia. Sonatrach will increase supply "gradually" through the TransMed gas pipeline that arrives in Mazara del Vallo.

"Increasing supplies takes time,” said Nicola Pedde, director of the Institute for Global Studies to Il Fatto Quotidiano. Pedde said that realistically Algiers could increase the gas sent to Italy by 2-3 billion cubic metres within a short time and another 4-5 billion within five years. Therefore the solution is neither immediate nor sufficient to bridge a possible interruption of the Russian supply. However, the trip to Algiers is the first of a series on the Prime Minister's agenda in the coming weeks, to accelerate the diversification of supply sources as much as possible.

Di Maio has said the government intends to "strengthen energy cooperation" with the Congo, Angola and Mozambique. The Foreign Minister has also already made stops in Qatar and Azerbaijan to prepare for possible new agreements.