Comment:The Russian leader may be a war criminal, but getting him into the dock to face justice may never happen 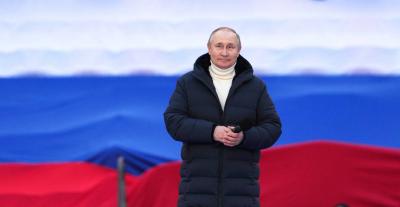 When Joe Biden accused Vladimir Putin of being a war criminal, it may have seemed like a statement of the blindingly obvious. It predictably provoked a furiously hostile reaction from Moscow, which described it as “unforgivable rhetoric”. Biden has since gone further, but the more important reaction to his original accusation is: what, if anything, can be done to arraign Putin?

The International Court of Justice (ICJ), an organ of the United Nations established in 1946, hears disputes between states but cannot prosecute individuals. And it is the ICJ that recently ordered Russia to halt its military operations in Ukraine, rejecting Putin’s claim that his invasion was justified to prevent Ukraine’s “genocide” in the Russian-backed enclaves in Luhansk and Donetsk. Of the 15 judges on the court, only the Russian and Chinese judges voted against the order. ICJ rulings are binding under the UN Charter, and the court order noted they “create international legal obligations for any party to whom the provisional measures are addressed”, but it has no means of enforcement. While Putin has already rejected the ICJ ruling, it does provide an authoritative rejection of his pretext for the invasion.

As for prosecution of individuals suspected of war crimes, there was a widespread hope, after the Nuremberg trials of Nazi war criminals ended in 1946, that this would set a precedent for other such trials. The cold war divisions ensured that this hope remained unfulfilled for over 30 years until the 1990s, when the Security Council set up ad hoc tribunals for the former Yugoslavia and for Rwanda. The relative success of the creation of these two bodies contributed to the impetus for the establishment of the International Criminal Court (ICC).

After much deliberation, a treaty to establish such a court with jurisdiction to prosecute individuals (but crucially not states) for the international crimes of genocide, crimes against humanity, war crimes and the crime of aggression was agreed in 1998 as the Rome Statute and entered into force in 2002, though the trial of the latter crime is subject to conditionality. But the ICC faces distinct problems. The crimes subject to its jurisdiction will in most cases be committed in situations of ongoing conflict, where investigations on the ground are risky or impossible. There may also be allegations (as in the former Yugoslavia) that peace negotiations will be prejudiced by claims of retributive justice. The tension between peace and justice may well have to be addressed in the case of Ukraine. And because it does not have the enforcement mechanisms enjoyed by any national judicial system, the court has to rely on the cooperation of states to arrest and surrender suspects.

This highlights the more serious challenge to the ICC: its lack of universality. Three of the five permanent members of the UN Security Council (China, Russia and the US) don’t support the court. Forty one states (including India) have neither signed nor acceded to the Rome Statute. So the authority of the court is seriously hobbled by the fact that four of the most important and populous states in the world decline to accept its authority. Another problem arises over the fact that the court cannot try a crime unless it has jurisdiction over the suspects. It may try genocide, crimes against humanity and war crimes only if the state on whose territory the crime was committed, or the state of which the suspect is a national, is a party to the statute or has formally accepted the jurisdiction of the court in relation to the particular crime. So while Russian soldiers arrested and charged with war crimes in Ukraine could be tried by the ICC, their political masters in Moscow will remain untouchable. Alternatively, the court can try a crime where a situation has been referred to it by the Security Council. As Russia is a veto-wielding member of the Security Council, that patently isn’t going to happen.

Some states that are not parties to the court’s statute have expressed concerns that their nationals may be tried by the court without their consent. The US is the most egregious example. While Bill Clinton signed the treaty, his signature was never ratified. His successor, George W Bush, went to extraordinary pains to keep the ICC from any jurisdiction over US citizens, negotiating bilateral treaties limiting their extradition to the ICC. During the Obama administration, US opposition to the ICC evolved to“positive engagement”, although no effort was made to ratify the statute. The Trump administration was considerably more hostile, threatening prosecutions and financial sanctions on ICC judges and staff in response to any investigation against American nationals. When in 2020 the ICC prosecutor Fatou Bensouda launched an investigation into alleged war crimes by US military personnel in Afghanistan, the former secretary of state Mike Pompeo went so far as to impose sanctions, including the refusal of visas and the freezing of any assets she might have in the US. The Biden administration lifted the Trump sanctions last year but remains wary of the ICC, in particular criticising it for opening an investigation into alleged war crimes in the Palestinian territories by Israel, another state that rejects its authority.

Other governmental opposition has come from members of the African Union, concerned that almost all the situations being investigated by the ICC are in Africa. But many of the allegations were referred to the court by the governments themselves; and for victims it is not a cause of concern but gratitude that the crimes for which they suffered are being investigated. In the case of tribunals for the former Yugoslavia and Rwanda (respectively ICTY and ICTR), they were, unlike the ICC, set up under Chapter VII of the UN Charter, thus giving binding universal legal force to its orders, establishing the tribunals’ primacy over national courts, and imposing an obligation on all states to cooperate with them.

Cases arising from some of the worst incidents in the different conflicts resulting from the dissolution of the former Yugoslavia, and the conflict in Kosovo, were brought before the tribunal. For example, the Srebrenica massacre of some 8,000 Muslim men and boys gave rise to ICTY indictments and trials for genocide. The most high-profile trials of the tribunal were those of Slobodan Milošević, formerly president of Serbia, Radovan Karadžić, formerly president of the Republika Srpska, and Ratko Mladić, commander of the Bosnian Serb army. Milošević died in detention before his trial was concluded, but the cases against Karadžić and Mladić ended with convictions for genocide and crimes against humanity. So there have been successes but, having twice given evidence to the ICTY myself, I have first-hand experience of how cumbersome and bureaucratic its procedures were, often resulting in convictions a quarter of a century after the crimes were committed.

Even when the ICC has jurisdiction over a crime or suspect, it will not be able to try the case if national authorities are investigating orprosecuting. This of course is highly unlikely in the case of Russia. But it emphasises a further difficulty for the court in that, unlike its Yugoslav and Rwandan counterparts, it does not have primacy over national jurisdictions; rather the reverse. It is a court of last resort. Nevertheless, the ICC chief prosecutor, Karim Khan, seems likely to indict some senior Russians, including Putin. Khan has already instructed his team to investigate potential war crimes. It shouldn’t be hard to prove a prima facie case.

For the ICC there is no bar under international law to the prosecution of heads of state, foreign ministers, diplomats, and others where the Security Council by resolution requires cooperation from states, not parties, thus effectively removing immunity from heads of state and others. But while he is head of state, Putin is never going to allow the

Security Council to pass such a resolution. The recent call in a petition signed by hundreds of thousands (and supported by, among others, two former British prime ministers: Gordon Brown and Sir John Major) for a specific International Tribunal for Ukraine, modelled on the ones for Yugoslavia and Rwanda, runs into the same problems the ICC will face in terms of enforcing its judgments. Short of regime change in Moscow, any international tribunal will not have the power to enforce its orders in respect of Putin and his co-conspirators. Even if Putin were overthrown – and there seems little likelihood of that in the short term – it is hard to see any likely successor Russian government agreeing to extradite Putin and his clique for trial in the Hague or elsewhere. Nationalist sentiment built up over so many decades would be overwhelmingly against such a move.

So where do we go from here? Much though we would wish it otherwise, the prospect of Putin appearing before an international court looks remote. The ICC and any other tribunal formed might seek to try cases in absentia.This is always unsatisfactory. But if the outcome of such a trial led to warrants for the arrest of an individual being issued, then that individual would find their ability to travel severely circumscribed. For Putin, this may mean that holidays in China and Belarus may be his only foreign travel options.

Sir Ivor Roberts is a retired British diplomat and the former president of Trinity College, Oxford. He was previously British ambassador to Yugoslavia, Ireland, and Italy

(This article first appeared in The New European)