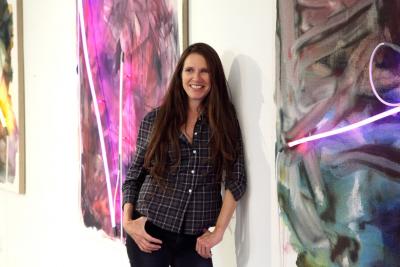 VENICE – The Museo di Palazzo Grimani is to present The Flaying of Marsyas, an exhibition of new paintings produced by Mary Weatherford running from April 20 until Nov. 27. The exhibition is designed in collaboration with architect and designer Kulapat Yantrasast and opens immediately prior to the commencement of the 59th Biennale di Venezia. The exhibition will take place on the museum’s second floor.

The works in The Flaying of Marsyas, created between January and March 2021, are inspired by Titian’s late titular masterpiece of 1570–76 – in the collection of the Kroměříž Archdiocesan Museum, Czech Republic – and reflect Weatherford’s enduring fascination with the painting. Alluding to the Renaissance painter’s subdued palette, while paying tribute to the distinctive light of Venice, Weatherford uses Flashe paint and neon tubing to distill the older canvas’s effect. She responds to Titian’s composition by translating the violent character of its mythological theme into a form that, while more improvisational, also alludes to fate, hubris, and the relationship between the human and the divine.

Weatherford’s approach to painting is rooted in personal experience and evokes a variety of urban and rural environments through experimentation with light, color, texture, gesture, and the interaction between a painted surface and three-dimensional addenda. In her best-known works, grounds of Flashe vinyl emulsion are sponged onto heavy linen panels and surmounted by neon-filled glass tubes. Weatherford started using neon in 2012, inspired by old illuminated signs that still stood in Bakersfield, California, where she was then working as a visiting artist. Casting an intense light onto the paintings’ modulated fields of color, the tubes and their trailing power cords often read as hand-drawn lines.

The Flaying of Marsyas will be accompanied by a catalogue featuring an essay by noted Titian scholar Nathaniel Silver, William and Lia Poorvu Curator of the Collection and Division Head at the Isabella Stewart Gardner Museum in Boston, Massachusetts.

Weatherford’s The Flaying of Marsyas completes the museum’s current exhibition program, which features both classical and contemporary art. Palazzo Grimani’s piano nobile is currently hosting the exhibitions Domus Grimani, which focuses on the return of the Grimani collection’s classical statues, and Archinto, an exhibition of new and recent paintings and sculptures by Georg Baselitz that includes twelve paintings made expressly for the Sala del Portego, on long-term loan to the museum from the artist. The Flaying of Marsyas and Archinto both present the work of contemporary artists who have been inspired by a building that represents the Renaissance in Venice in an unusual way, its style being Tuscan-Roman rather than Venetian. The myth of Marsyas is also depicted in the frescos enriching the ceiling of the Camerino di Apollo (Apollo’s Chamber) by Francesco Salviati, creating a further bond between the palace and the new paintings by Weatherford.

The Flaying of Marsyas and Archinto are produced by Gagosian and organized in collaboration with the Veneto Regional Directorate for Museums and the Venetian Heritage Foundation.

The Museo di Palazzo Grimani in Santa Maria Formosa is a Renaissance pearl that in the past was praised by travelers, tourists, and diplomats. Today, after several years of restoration, it is open to visitors in all of its beauty, richly decorated with stucco and frescoes by the hands of artists including Giovanni da Udine, Francesco Salviati, and Federico Zuccari. The palace served as a magnificent site for the scenographic arrangement of the family’s archaeological collection, which was later donated to the Serenissima.