The 'Grand Tour’ Italian dream from Venice to Pompei 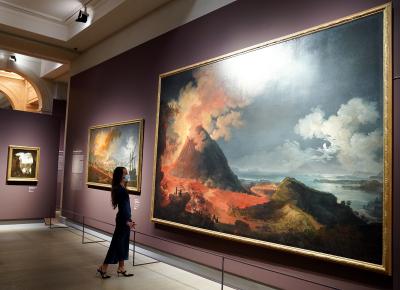 MILAN – The exhibition 'Grand Tour: Sogno d’Italia da Venezia a Pompei,' is open until March 27 in the Intesa Sanpaolo museum of the Lombardy capital.  The Grand Tour was an extraordinary phenomenon, universal in character. It was decisive in forging a perception of Italy, linked to the beauty of its landscapes and art, still of great interest today, which makes the country’s truly unique identity.

The exhibition, under the High Patronage of the Presidency of the Republic and in partnership with the National Archaeological Museum of Naples and the State Hermitage Museum of St. Petersburg, presents around 130 works from the Intesa Sanpaolo collection, private collections and numerous Italian and international cultural institutions, like the Museo Nacional del Prado, Madrid, The National Gallery, London, Musée du Louvre, Paris, The Metropolitan Museum of Art, New York, Österreichische Galerie Belvedere, the Victoria Albert Museum, London, Rijksmuseum, Amsterdam, Statens Museum for Kunst, Copenhagen, Musée des Beaux-Arts, Lyon, Gallerie degli Uffizi, Florence, the Capitoline Museums of Rome, the Vatican Museum of the Vatican City, and Museo e Real Bosco di Capodimonte. Two works have also been loaned from the United Kingdom, from the Royal Collection of Queen Elizabeth II, in addition to other works from great royal residences including the Royal Palaces of Versailles, Caserta and Pavlovsk, in St. Petersburg.

Works from all over the world and intense study have brought this exhibition to life, curated by Fernando Mazzocca with Stefano Grandesso and Francesco Leone. On the one hand, the aim is to provide a representation of a composite Italy of overwhelming beauty, to the extent that it is depicted by artists as a suspended place, a stratification of memory and knowledge, a still image of history; and on the other, to present documentation of the protagonists who gave rise to the myth of the “Bel Paese”.

Between the end of the seventeenth and the first half of the nineteenth century, Italy was the destination of choice for academics, artists, young noblemen, European aristocrats and intellectuals. Only in Italy could classical culture culminate in a complete synthesis of nature and history. The Grand Tour (the expression was used for the first time in 1697, in Lassel’s work, An Italian Voyage) soon came to be considered an essential moment of an educational and formative path, as well as a sign of a precise social status. Italy was a fundamental destination for artists and academics with a passion for architecture, painting and sculpture, both ancient and modern. In the eighteenth century, the extraordinary archaeological discoveries of Herculaneum and Pompei further roused interest in the country. Italy came to be perceived as the frontier of the ancient myth, the vision of its art, cities and landscape (sweet yet sublime), the land of desires, events and fateful encounters, or simply the story of all stories, a chronicle of places and objects seen by others and recognisable even after only listening to narrations of them. Or perhaps they were recognisable from drawings and paintings widespread throughout Europe, also thanks to Italian painting (such as the vedutas and capriccios of Guardi and Canaletto, or the engravings of Piranesi). Places are vested with a particular sense of importance (traditional cities like Venice, Florence, Rome and Naples, and ancient towns), as are landscapes (from the Alps, to Vesuvius and Etna). Festivities, carnival, theatre and music inspired pictorial celebration, while sculpture recounted archaeology and the cult of antiquity, definitively established by Winckelmann. This formative moment became compulsory for Europe’s elite, as well as those from other continents, involving sovereigns, aristocrats, politicians, churchmen, academics and artists, all besotted with the sheer variety of Italy’s unspoilt landscape, the magnificence of cities, monuments and works of arts which made and continue to make this land a sort of wonderful “open-air” museum.

Rome was undoubtedly the main destination of the Grand Tour, the universal and eternal city, the first capital of the ancient world and then of Christianity. Travellers flocked here to study the secrets and canons of beauty, deposited not only in ancient marble works but also in the masterpieces of the Renaissance and seventeenth century Classicism. Places celebrated by classical literature, and which became legendary thanks to Horace and Virgil, were retraced in Lazio.

The magnificence of the landscape of the gulf and the Vesuvius area, combined with the allure of testimonials from antiquity, above all following the discovery of the cities of Pompei and Herculaneum, buried by the catastrophic eruption of Vesuvius in 79 AD, turned Naples into another unmissable stop along this educational and formative journey. In Campania, the itinerary also came to embrace the recovered area of Paestum, where visitors could relish in the sublimity of magnificent Doric temples, in a period in which Greece, still under Ottoman rule, remained closed to travellers.

Testimonials of Ancient Greece also inspired the most avid travellers and one of the first was Goethe, whose famous journey through Italy led him to remote and unknown Sicily, where he fell in love with the harshness of its primitive landscapes and the magnificence of the temples of Segesta, Selinunte and Agrigento, as well as the Greek theatre of Syracuse. Other favourite destinations along the Grand Tour included Venice, a unique city, bustling with events; Vicenza, where visitors could admire the buildings of a universal genius the likes of Palladio, emulated the world over; Florence, where visitors could behold wonders of the ancient world and Renaissance in churches and collections, the Medici Gallery in particular. Milan too, at a later stage, above all thanks to the presence of Leonardo and his legendary Last Supper, the neighbouring lakes and their shores, as well as its famous villas, destinations for the most demanding travellers since ancient times. An obsession with antiquity meant that the second half of the eighteenth century came to be the golden age of the Grand Tour, when the first public museums were founded in Rome, between the Capitoline Hill and the Vatican City. This passion was reignited after being somewhat dampened by the Napoleonic wars, with the return of travellers to Italy. However, tastes changed and following the so-called rediscovery of the “Primitives” and of Christian art, alongside ancient sites, interest in Medieval and early Renaissance sanctuaries also flourished, including the highly admired Camposanto of Pisa, Orvieto Cathedral, or the churches of Assisi.  Travellers were also passionate collectors, of ancient sculptures in particular, in line with a fashion that spread thanks to Winckelmann, who disclosed the secrets of the perfection achieved by Ancient Greeks, deposited in masterpieces conserved in large aristocratic collections in Rome and Florence, making them accessible to everyone. Thus for a long time Italy became the biggest market, not only for ancient art, but also of a contemporary production, inspired by the memory of antiquity. The most original exponent of this taste was undoubtedly the brilliant Piranesi, whose visionary engravings and inspired furnishings offered an extremely personal vision of classical imagination for an international clientele. He inspired an impressive resurgence of the most prestigious forms of art, from bronze statues to gold smithery, mosaics and glyptics, reaching levels on a par with the Renaissance. Prestigious assemblages of metals and precious stones by Valadier enchanted the entire world, while images of the most popular ancient statues became widespread among royal residences and aristocratic abodes throughout Europe, from the bronze statuettes by Boschi, Zoffoli, Righetti and Hopfgarten, to the marvellous biscuit porcelain statuettes of Volpato. Demand from foreign collectors also gave painting a new lease of life, vedutas and landscapes in particular, until then considered a minor genre. In this field too, thanks to great and original artists like Canaletto, Panini, Joli and Lusieri and those who accompanied travellers from abroad, like Hubert Robert, Jones, Wright of Derby, Hackert, Volaire, Ducros, Granet, Valenciennes and Catel, unthinkable levels were reached between the eighteenth and nineteenth century, passing from the scientific rationality of the ‘vedutisti’ (landscape painters) to the emotion of the landscape seen as an expression of one of the moods of the romantics. However, the portrait was the most frequently demanded and best-loved genre among foreign collectors, along with vedutas (landscapes) of visited places. A celebration of rank was replaced by an exaltation of character and culture. This gave rise to depictions alongside ancient monuments and sculpture that had been admired in Italy. Batoni was an absolute master in this field, one of the greatest portrait artists of all time. His portraits represented a status symbol, just like those by his rival Mengs, by the two contending painters Vigée Lebrun and Angelica Kauffmann, of Von Maron, Tischbein, Sablet, Zoffany, Fabre, Gérard, Ingres.Travellers were also attracted by the singularity of the Italian customs and the beauty of an apparently content population that lived out in the open most of the year, in virtue of the mild climate. An extraordinarily popular illustrator and painter like Pinelli and painters like Sablet, Géricault, Robert, Schnetz, Navez and Delaroche represented domestic life, capturing its most endearing and moving aspects and vindicating the dignity of the people.

Sculpture generated the biggest profits, not least the trade of ancient marble works, their restoration and often the production of copies, of which Cavaceppi became the undisputed protagonist. Thanks to Canova and his skilled followers, the end of the eighteenth century saw a rise in original sculpture, which despite drawing inspiration from the ancient world, interpreted modern sensitivity, meaning that this art, which became Italy’s pride and joy, remained extremely popular during the 19th century, throughout the world. Ultimately, the Grand Tour became a journey of self-discovery. This is, after all, what happens to the main character in Forster’s A room with a view: “Then the pernicious charm of Italy worked on her, and, instead of acquiring information, she began to be happy”.

At the Gallerie d’Italia, paintings, sculptures, art objects, displayed in a suggestive dialogue in this exhibition of particular relevance today, aim to repropose the image of an Italy loved and dreamed of by a Europe that recognised itself in common roots, forged over the centuries in the country. 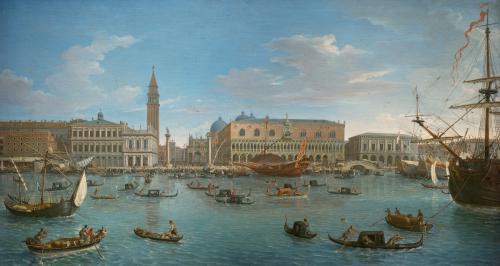 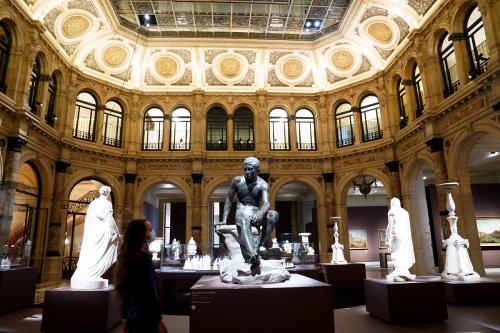