Pope thanks Poles for helping Ukrainians affected by the war 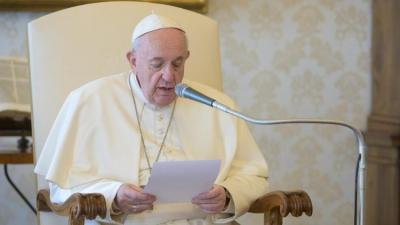 VATICAN – Pope Francis thanked the Polish people for being “the first to support Ukraine,” during his general audience, said the Vatican News.

The pontiff addressed Poles directly, saying, “you were the first to support Ukraine, opening your borders, your hearts and the doors of your homes to Ukrainians fleeing the war. You are generously offering them everything they need so that they can live in dignity, despite the drama of the moment. I am deeply grateful to you and I bless you from my heart!”

The pope paid special attention to the situation of the elderly people who spent hours in shelters, hiding from bombs. Then he thanked his translator, who had been summarising his speech in various languages during the Wednesday general audience.

"This Franciscan monk, who is now speaking in Polish, is Ukrainian. His parents are currently in underground shelters to defend themselves from the bombs in a place near Kiev and he continues to do his duty here with us. Accompanying him, we accompany all those who suffer from the bombing, their elderly parents and many elderly people who are underground to defend themselves.”

At the end of his speech, Francis addressed the monk directly and said, “we carry the memory of this people in our hearts and thanks to you for continuing your job.”