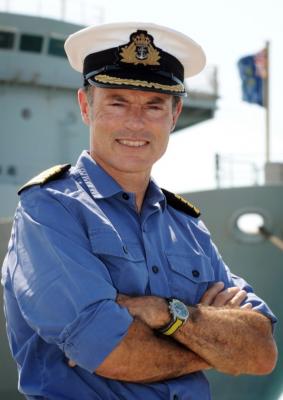 ROME- A dramatic turning point took place in the Rebibbia courtroom bunker during the third hearing of the trial against the alleged Somali pirates last week. Gerry Northwood, commander of HMS Fort Victoria, recognized one of the men behind bars. Ahmed Mohammed Ali is the only one of the seven Somalis attending the trial in a separate “cage”.

“I am reasonably sure that the person we thought was the leader of the group of Somalis held on board the Italian ship Montecristo and on board the fishing boat Al Hasib is the person portrayed in picture number 7.”

Commander Northwood spoke for over an hour and a half and also answered to questions by public prosecutor Francesco Scavo and defendant lawyer Douglas Duale.

His testimony is one of the most important of the entire trial, because it was a Royal Marines boarding team sent from HMS Fort Victoria that boarded the Montecristo on October 11, 2011, roughly 24 hours after a group of Somali pirates managed to climb on the vessel, 200 miles off the eastern coast of Somalia, in the Indian Ocean. The Italian ship, where 22 crew members were holding out in the sealed off “citadel” to prevent the pirates from taking control of the vessel, was first contacted by the helicopter from a Royal Navy frigate, HMS Somerset, which was on patrol under the flag of the NATO anti-piracy mission Ocean Shield.

The Northwood testimony is precise: facts, dates, evidence to recall the sequence of events which brought those persons behind the bars thousands of miles from their homeland:

“I went on board the Montecristo myself after the Royal Marines freed the crew and put the Somalis under escort in an area on the front side of the vessel- Northwood recalls - I was able to check out the extensive damage caused by the pirates, particularly two Rpgs that hit the main deck, one of them still visible in the back of the deck itself. I could also see the damage caused by a fire, which I assume was set trying to swell the door of the citadel where the crew took refuge. Cabins and other areas of the ship were also clearly damaged.”

From those elements, Northwood concludes that the pirates were “particularly aggressive” in their attempt to gain control of the ship.

After the crew was freed and those pirates held, HMS Fort Victoria waited for the Italian warship Andrea Doria and handed over the Montecristo as it was. Then the British warship set off to find the mother ship from where “we were sure the skiffs (the speedboats used by pirates) to board cargos were released.” That ship was found a few days later: it was a fishing boat, a how, with a 20 something Pakistani crew held hostage by four armed Somalis. Among them, Ahmed Mohammed Ali, according to Northwood recognition.

“We saw to skiffs on board of the Dhow - Northwood says - one was loaded on the deck and another one was following the Dhow, tied by a rope.” The Dhow, which lately was identified as the Pakistani fishing boat Al Hasib, did not stop when warning shots were fired. Again, captain Rod Yap called the Royal Marines to board the ship.

“Somalis surrendered immediately" Northwood said, "we asked permission from NATO command and UK authorities to hand them over to Italian navy and to set the Dhow on his course.” So it happened, and according to lawyer Douglas Duale, this is a very sensitive point. Duale asked the court to have a copy of the “permission” granted to captain Northwood but the court rejected the request. After the hearing ended, Duale commented, “If they were held by British military, there should have been extradition orders rather than a simple military dispatch.”

The testimony given by captain Northwood satisfied Francesco Scavo, the public prosecutor. He thinks that facts are clear enough at this stage of the trial, but further elements are expected in the coming hearings, the next one set for July 11.

Meanwhie, in a separate trial on the same issue on June 16, the Juvenile Court in Rome sentenced four other underage Somalis to eight years of prison. The judges did not accept the prosecutor request to recognize them guilty of terrorism, but accepted the charge of attempted hijacking of the crew of the Montecristo with the purpose of taking ransom, as it has happened already with several Italian commercial vessels crews.

Next in the line of witnesses is Rod Yap, the commander of the Royal Marines boarding team who first reached the Montecristo and some of the crew members, plus the military personnel of a US warship whose helicopters intercepted the Montecristo before leaving the scene to UK warships. The trial will last through the summer and is to come to an end possibly before the end of the year. If a guilty sentence will be given, it will be the first of its kind in Italian judicial history and a landmark case for jurisdiction issues in the global fight against piracy on high seas.