WFP Executive board to decide on Beasley second term imminently 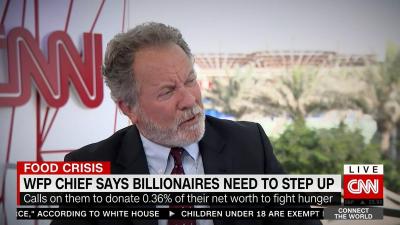 ROME – Diplomats accredited to the World Food Programme and sister agency FAO are waiting gripped for the outcome of the "internal selection process" of the WFP Executive Director under way as the first mandate of former Republican governor David Beasley nears the end of its term in early April, diplomatic sources say.

The process is internal to the United Nations and FAO, and the Director General of the FAO, Qu Dongyu, was expected to announce the name of the proposed appointee selected by himself and the UN Secretary General, at a session of the WFP Executive Board to be held from the end of February, the sources said.

For almost the past 40 years the ED of WFP has been a U.S. citizen. Beasley is popular with most of his staff apart from a rump of old guard WFP executives, and it would be seen as unfair if he were not offered a second term given that he collected a Nobel peace prize for the organisation, though there has been speculation that he would not be unhappy to return to the United States to resume his political career in what he hopes will be a future Republican administration. If he does relish the prospect of bowing out of WFP, it was not evident as Beasley appealed passionately for the world to prepare to ease the plight of Ukrainian refugees pouring out of their homeland this week following Russia's brutal invasion of the country.

Despite being a Chinese Communist Party member, Qu Dongyu is expected not to oppose re-election of Beasley, or appointment of his reputed American rival for the job, the former U.S. ambassador to the UN food agencies David Lane, if that is the choice of the UN Secretary General under the spoils system that governs distribution of top UN jobs, the sources said.

Washington is the largest donor to both FAO and WFP and Qu Dongyu would hope for U.S. support for his re-election to a second term in return for not opposing an Amercan candidate for the helm of WFP, said the sources.

It is not known if EU countries have put up candidates to head WFP, the world’s largest humanitarian agency. Germany was outraged when Brazilian FAO DG Jose Graziano da Silva refused to consider two German candidates to head WFP and pushed through Beasley’s appointment, again as an evident quid pro quo for Washington not opposing Graziano being elected to a second term at the FAO.

Some diplomats consider that the role of the FAO DG in the process, dating to when WFP was an executive arm of the FAO before becoming a separate agency, is awkward and overplayed.

The WFP budget is many times higher than the budget of FAO. WFP prides itself on American-style management that its executives claim is more agile and efficient than the Italian style cronyism that critics say is still frequent at the FAO.