Shaking off history in favour of a future 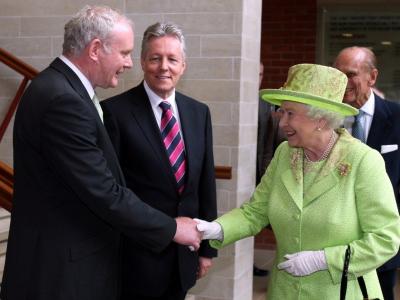 PORTRUSH, --If any picture is worth a thousand words, it must be this one. Martin McGuinness and Queen Elizabeth II. 's deputy First Minister and the 's head of state. Her Majesty by the Grace of God and a former leading figure of the Irish republican paramilitary struggle, who had long been bent on ending her reign. And they're shaking hands. Behind closed doors, a private meeting and then an open one, for the cameras.

It was all over in a flash, and yet the political landscape in is changed, changed utterly. All the tension, the history, the often-heated arguments for and against this meeting happening – all counted for naught. When it happened it all seemed normal, ordinary … natural. This was a testament to how far we've come. “Today was a significant milestone on the road to reconciliation on this island and between our two islands,” said Peter Sheridan, chief executive of Co-operation Ireland, a body that organised the event and which is patronised by both the royal family and the government in Dublin, whose aim is to build cross-Border and cross-community understanding. “In a very relaxed atmosphere what struck me was the ordinariness of the handshake by people who are in no way ordinary.”

Of course, the reaction to the thing itself was rather less ordinary. Furore on both sides of the divide, anger about it going too far and matching claims that meeting one debased the other. But in a place where too much importance is often put on the smallest of things, this was a moment for the books and one that elevated the reputations of its protagonists immeasurably. Here was McGuinness, meeting the woman he'd sworn to overthrow and with whom he'd waged bitter war for decades. She was on the throne during the worst of Northern Ireland's troubles and it was in her name that the terrible events of Bloody Sunday – when he was serving as the second in command of the Provisional IRA's Derry operation – were committed. An

And here was the Queen, the focus of a half-century of hatred and the head of a state that men like McGuinness believe should not exist, meeting the man who was leading the PIRA when it assassinated her cousin, Lord Louis Mountbatten in a brutal attack in 1979 – at the same time murdering two teenage boys and an elderly woman. Just three of the incidental tragedies of a long and terrible war. That point might have crossed the mind of the event's guest of honour, the great poet Michael Longley, who in his well-known poem Ceasefire wrote: “I get down on my knees and do what must be done, and kiss Achilles’s hand, the killer of my son.”

Privately, perhaps neither wanted the meeting and yet it was and is vital for both. As the unelected head of the ruling royal family and the former paramilitary-turned-politician, both Queen Elizabeth  and McGuinness are the very definition of the divide. Their example is integral to the future of the peace in Northern Ireland. The phrase “peace process” has been used so much on the island of Ireland that it has almost lost its meaning, but we must all remember that this is a “process” –- and a long one. The meeting on June 27 showed what's possible; if McGuinness and the Queen can overcome the past and come together, then anyone can. Co-operation Ireland's Sheridan hit the nail on the head, by quoting one of Ulster's finest sons and another of its great poets, Seamus Heaney.