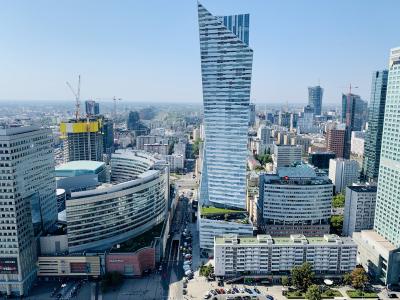 Views from the Palace of Culture and Science in Warsaw

WARSAW – The Italian Ambassador to Poland, Aldo Amati, highlighted the considerable business potential of the central European country in an interview with Italian financial newspaper, The Economic Tribune.

If foreign investors in Poland are willing to overcome the initial language barrier, said the ambassador, then they will have access to “the largest market in Central and Eastern Europe.”

In 2019, Poland received dlrs 236.5 billion of international investment, equal to 40 percent of the country’s GDP. This makes the Warsaw Stock Exchange (WSE) “probably the largest stock exchange in financial instruments in Central and Eastern Europe and a rapidly growing stock exchange in Europe.”

“The value of foreign investment in Polish Special Economic Zones, and in the country in general, has grown steadily over the last decade, making Poland one of the most attractive countries in the EU for foreign direct investment,” explained Amati. The Polish Investment Zone program, which aims to encourage both new international investors and current ones to reinvest has been accelerating the growth of SEZs since 2018.

In 2020, Polish GDP decreased by “only 2.8 percent” over the pandemic. This year, Poland’s economy is expected to rebound by around 4.5 percent, if the pandemic doesn’t stop it.

Amati emphasised the solid economic cooperation between Italy and Poland. “Over the past three decades we have established ourselves as Warsaw's third largest trading partner worldwide (behind Germany and China), with an exchange that reached 21.5 billion euros in 2020.”

There are more than 2000 Italian firms in Poland and, according to the ambassador, there is still significant potential to be explored in many sectors, such as energy, pharmaceuticals, biomedicine, and infrastructure.

Products exported from Italy are also highly valued in the Polish market, for example motor vehicles, chemicals, food, and clothing.

However, Amati pointed out that economic cooperation is also subject to the delicate context of international relations and politics.