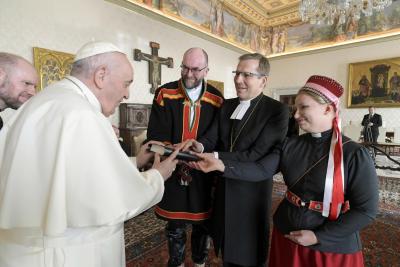 ROME – A Finnish ecumenical delegation visited Rome for the Mass of Saint Henry, celebrated in the Basilica of Santa Maria Sopra Minerva. The Lutheran bishop of Oulu Jukka Keskitalo officiated, and the Catholic Bishop Emeritus of Finland Teemu Sippo SCJ gave the homily; the Finnish ambassador to the Holy See, Kalle Kankaanpää, read a text while the Sámi pastor of Inari, Mari Valjakka, read an epistle in Sámi, the Lapp language.

Interventions, during the celebration, accompanied by liturgical songs by the Voces choir of Oulu by the parish priest of Inari, Tuomo Huusko and other priests. In the chapel of Saint Henry, which in the basilica is dedicated to ecumenical liturgical events, a Finnish flag faced a bust of the saint, martyr bishop, protector of Finland.

The evocative celebration this year had a historical peculiarity: for the first time the Lapp language resounded in an ecumenical liturgical celebration which is all the more significant if one adds to the content of the meeting that, previously, the delegation had had a meeting with Pope Francis in which the Lutheran bishop informed the Pope about the hardships of the only indigenous people of Europe, the Lapp or Sámi. On the occasion, the Pope stressed that we walk together "swiftly and diligently", in the "many paths of charity which, while bringing us closer to the Lord, present in the poor and the needy, unite us among us".

Francis also did not hide the efforts for the "goals that still seem distant and difficult to reach", when fatigue and discouragement arrive. He was attentive and sensitive to information on the sad events of the Lapp people, presented by bishop Keskitalo who recalled the need for the church to do penance towards that people as well as many other indigenous peoples.

In an interview with the Vatican news, pastor Valjakka explained that the Sámi people have historically been marginalised in Finland.

“The history of relations between the Sámi people and the local church has not always been without problems,” she said, “because there was an attempt to assimilate us into the dominant culture.”

“There was a time when we couldn't use our language or even show the signs of our culture.”

Now, there has begun a process of truth and reconciliation. “The Sámi people can talk about their experiences, what they have suffered, felt and therefore begin a journey to heal.”

“It will be a very long and difficult process,” says Valjakka, “but I hope there is a chance to understand each other better. The fact that I am a woman and that I come from a minority group within the same Sámi minority means that I find myself, not every day but maybe every second of the day, fighting against the current.”

“But being here, having the opportunity to meet Pope Francis and also to be able to speak and exchange views with Catholics who work within Finland and who are also in contact with minority groups, gives me the feeling that perhaps these currents are not so strong, not so powerful.”

Valjakka presented the pope with the first translation of the Bible into the Sámi language and at the end of the ecumenical Mass offered a second copy to her fellow Sámi Annikki Sarre who has lived in Rome for many years. Sarre is in some way a representative in Italy of that small number of tenacious people.

On the sidelines of the Mass in Santa Maria sopra Minerva, the possibility has leaked that by the summer the new Catholic bishop of Finland may also be a Finnish national. In 2019, bishop emeritus Sippo resigned from the position. Monsignor Sippo was the victim of a serious accident that greatly affected his subsequent health conditions, which is why he had to leave active service, always contributing, with his commitment and dedication, to the needs of his diocese. Sippo was the first bishop of Finnish nationality and his successor could be a compatriot. Currently the diocese is run by an apostolic administrator, the Italian Don Marco Pasinato. 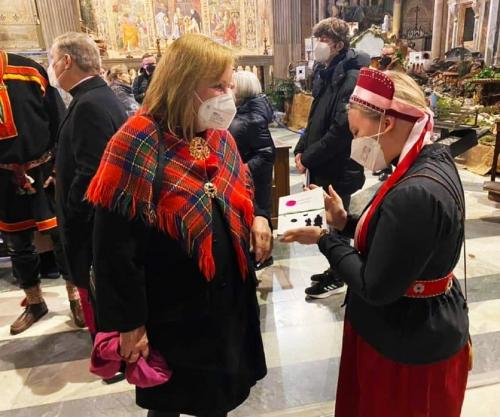 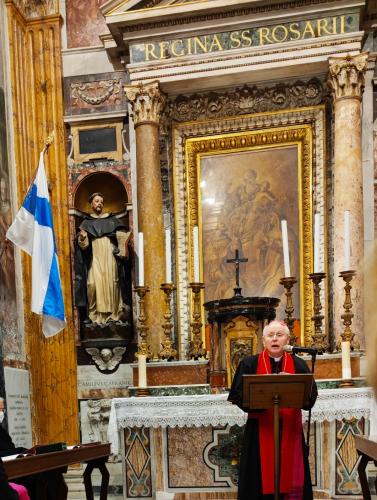