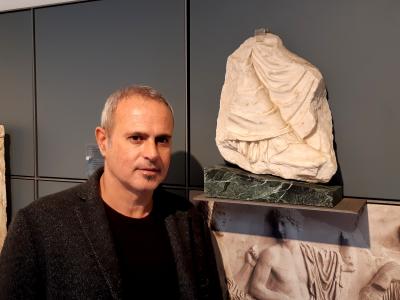 Regional Councillor Alberto Samonà in front of the Fagan artefact

PALERMO – The Antonio Salina Archaeological Museum in Sicily’s capital has agreed to send a valuable fragment of the Parthenon known as the ‘Fagan artefact’ back to Greece in exchange for two Italian ancient artworks, said the museum. The decision has added fuel to the long-running debate on returning museum items to their country of origin and it may have repercussions for the case of the Elgin Marbles in the British Museum.

The Fagan artefact is a Pentelic marble fragment belonging to the eastern frieze of the Parthenon, and it depicts the foot of a Greek Goddess, either Peitho or Artemis, seated on a throne. The sculpture's nickname comes from the London-born diplomat, painter and archaeologist Robert Fagan who inherited the marble fragment at the turn of the century and sold it to the Royal University of Palermo in 1820. Fagan spent most of his career in Rome and Sicily.

The fragment will now be kept at the Acropolis Museum in Athens. The museum’s director Nikolaos Stampolidis called the arrival of the Palermo Frieze “extremely important.”

“Our beloved sister Sicily has paved the way for Parthenon friezes kept in other European cities to also be returned to Greece, above all in London and at the British Museum,” he said in pointed reference to the Elgin or ‘Parthenon Marbles.’

Stampolidis also took the opportunity to highlight the conclusion reached recently by the Intergovernmental Commission of UNESCO for the Promotion of the Restitution of Cultural Heritage to Countries of Origin (ICPRCP). Since 1984, Greece has requested that the British Museum return the Parthenon sculptures to their country of origin. On Sept. 29, the ICRCP officially recognised the legitimacy of the Greeks’ demand and called on "the United Kingdom to reconsider its position and proceed in a dialogue in good faith with Greece.”