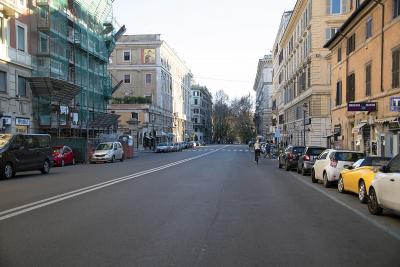 Via Merulana, where another construction worker died at work Tuesday

ROME – Following the collapse of a crane that killed three workers in Turin, recent surveillance activity indicates that nine out of 10 construction companies are not in compliance with safety regulations, announced the director of the National Labor Inspectorate Bruno Giordano on TG3. The news comes as the construction industry announced yet another death at work, that of a 50-year-old man who fell from scaffolding in Rome city centre on Tuesday.

The Councilor for Labour of Rome Capital, Claudia Pratelli, went to the scene of the latest fatal accident - a scaffolding in via Merulana, between Santa Maria Maggiore and San Giovanni areas of the capital. The area around the building has been cordoned off and an investigation is underway to ascertain any violation of safety regulations on the site.

Pratelli expressed her condolences to the man’s family and said, “another fatal accident at work on a construction site in our city. The list of victims is unacceptable."

“The number of accidents is dramatically increasing and this is linked to the recovery of the construction sector. We must take concrete and rapid action to ensure that companies implement all the safety measures necessary to protect workers.”

Statistics have also shown that the deaths at work in the construction sector make up one tenth of the total in 2021 (98 out of 1017). Transport and logistics have the next highest rates.

Secretary of the Lazio construction workers federation Agostino Calcagno said, “the tragedy of this sector is that the construction contract is not applied in 99 percent of cases.” He explained that the hours of safety training required by law - currently 16, but which will soon be increased to 32 - are not there, and that vital safety measures are also absent.