Around 450 migrants wait on Sea Watch 3 for safe port 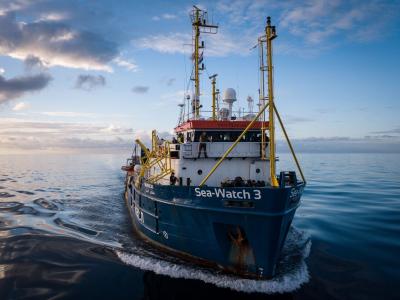 AUGUSTA – The Geo Barents, a Doctor's Without Borders rescue ship, has found safe port for the 558 migrants it was carrying to disembark, after having waited at sea for days, while The Sea Watch 3 is still waiting for an offer of safe harbour, the coast guard said.

Some 1000 migrants were rescued by the two NGO rescue ships over the Christmas weekend. After an uncertain wait, the Geo Barents was offered safe harbour at Augusta on Sicily by the Italian authorities. Health checks for all those who were on the ship were due to begin Wednesday morning.

On board the Sea Watch 3, which is still waiting on the Mediterranean Sea, the youngest migrant is just two weeks old. In total, this ship rescued 446 migrants in five operations over three days.

The Geo Barents had completed eight different rescue operations, the most recent of which was on Christmas Eve. On board were 145 minors - 80 percent of whom were unaccompanied  - and three pregnant women. Six children are under the age of four.

After the Geo Braents was granted safe harbour, Fulvia Conte from Doctors Without Borders said, "We know that this is not the end of their journey, but we are happy because their landing is a very important step. Libya is not a safe haven."

A Nigerian woman who is nine months pregnant was able to disembark the Geo Barents early with her two-year-old daughter at Madonnina di Mapedusa pier, in order to be taken to hospital for immediate obstetric care.

While the Doctors Withour Borders vessel waited at sea to find a port, midwife on board Kira Smith, said , "we are treating [the migrant passengers] for fuel burns, seasickness, respiratory infections and injuries related to violence. All of our survivors need further immediate care and a safe place as soon as possible.”

Francois, a migrant from Cameroon who suffered violence in Libya, said, “I have seen many people die in Libya. They were talented, hardworking and intelligent.” He continued, “I want to denounce what is happening in Libya and make sure that people do not lose their lives at sea.”

Recently 28 lifeless bodies were found on a beach in Libya, victims of one of the many shipwrecks that have occurred on the route between North Africa and Europe.