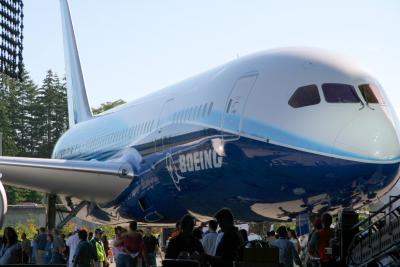 GROTTAGLIE – As part of the investigation into the defective fuselage provided by the Leonardo group and its ex subcontractor, MPS, to Boeing 787 Dreamliner aeroplanes, Italy’s financial police went to Leonardo’s Apulia-based factory to execute a decree of evidential seizure, authorities said.

On Oct. 14, the Leonardo group lost 300 million euros in less than an hour, due to the fact that some of the aircraft's components did not comply with Boeing's requests.

The accusations are, in various capacities, criminal association, commercial fraud and an attack on the safety of air transport. According to preliminary investigations, seals affixed to numerous metal components intended for production of sections 44 and 46 of the Boeing 787 fuselages were produced using titanium and aluminum - different from those requested by the client and in violation, the prosecution argues, of technical specifications.

In particular, according to the decree issued Saturday, the two suppliers would have "permanently" used "structural metal components by purchasing the raw material from suppliers not certified by Leonardo" and used "grade 2 titanium" instead of "titanium alloy" prescribed by the customer. Grade 2 titanium “has mechanical properties and structural strength that are far lower than those of the aforementioned alloy”. According to the prosecution’s theory, the passenger floor structure of the 787 would also have been produced with the grade 2 titanium.

Leonardo, formerly Finmeccanica, is 30 percent controlled by the Treasury and builds 14 percent of the Boeing 787 Dreamliner aircraft. It produces sections of the fuselage (specifically numbers 44 and 46, as above) and the horizontal stabilisers. Recent problems, traced back to these compenents, caused the plane to be placed under observation by the Federal Aviation Administration, the US body for flight safety.

Pending the results of the checks, about 100 aircraft have been blocked, to the value of 20 billion dollars. However, about 450 planes may be overhauled for the problem.

The owner of MPS Antonio Ingrosso along with some family members are under investigation in Brindisi for fraudulent bankruptcy. House arrest had been ordered for the defendants. Ingrosso allegedly used company funds for personal purposes, including the purchase of artwork and holidays.

On Dec. 7, the Leonardo group filed a complaint and said that relations with MPS ceased in April 2020.