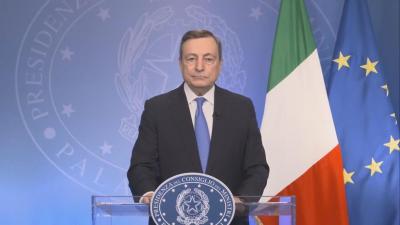 ROME – "It is in North Africa, on this southern shore which represents the true ‘backyard’ of Italy and all of Europe, that the capacity of the most developed countries will be played out to govern the political transitions which concern stability and control of the changes facing this region,” went part of the speech by Italian Prime Minister Mario Draghi at the start of the Mediterranean Dialogues Monday.

The Prime Minister’s comments on the challenges that await the geopolitics of the Mediterranean sum up very well the importance that the government of Rome attaches to the political and security situation in the Mediterranean region.

The Mediterranean Dialogues, organized by the ISPI (Institute of Italian Political Studies) in Milan, where Prime Minister Draghi gave his comments, allowed an overview of the crucial issues in the region, starting with Libya where the march towards the Dec. 24 elections is strewn with many pitfalls.

Indeed, on the occasion Draghi picked up the ideas already expressed at the Paris conference on Libya on Nov. 12 and underlined the need for rapid action to reorientate the political process of this country, in the spirit of the efforts of the international community.

In the meantime, the resignation of the UN Secretary-General's Special Envoy for Libya Jan Kubisch has probably only worsened a situation which, according to the head of the Italian government, was already uncertain due to the absence of a real electoral law.

The presentations and the examination of the various candidatures, according to Rome, is taking place in a climate of bitter conflict between Tripoli and Benghazi.

This has led Italian diplomacy to act on several fronts - to avoid ‘French nuisances’ here and there, to convince the immediate neighbour that the way out of the crisis can only come from an exclusively internal effort, but also to contribute to the holding of legislative and presidential elections on the same date, as that foreseen by the UN. This would avoid the risk of the legislative elections influencing the result and the climate of the first round of the presidential elections.

Foreign Minister Luigi di Maio, also speaking during this inaugural session of the Med Dialogues, insisted that "the efforts of his country are part of an effort that we are launching with many of countries for a dynamic partnership between Europe and its southern neighborhood in the broad sense, to face common challenges together and transform them into opportunities of common interest, on Libya and on other issues.”

Luigi Di Maio then underlined to what extent the objective of the Med Dialogues this year is a "positive agenda", which considers the Mediterranean "not as an epicentre of crisis, but having an extraordinary potential, mainly as a material and ideal platform of connection between Europe, Africa and Asia, united in a single macro-continent.”

“Ideological rivalries,” he continued, “competition for control of resources and the emergence of new crises which are added to those still unresolved should not limit our effort, but on the contrary strengthen it to avoid negative dynamics.” An ambitious and urgent project.