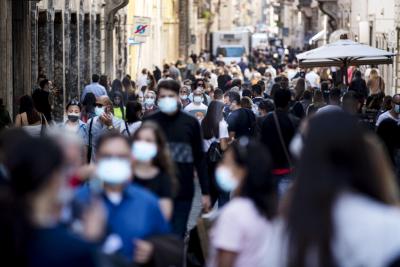 ROME — The mayor of the Eternal City, Roberto Gualtieri, has brought back compulsory mask wearing in crowded areas of the capital, the government said.

The rule came into effect Saturday and will last until midnight on Dec. 31, although it may be extended until New Year or later.

Gualtieri’s decision comes following an appeal by the governor of the Lazio region, Nicola Zingaretti, who suggested tightening the measures to contain the spread of infection.

The administration summaried, "the obligation to wear a mask must be strictly applied in all areas where gatherings and crowds may occur - shopping streets, meeting places, food markets, Christmas markets, exhibitions and any other event organized for the Christmas holidays in the open - where, in agreement with the prefect and the heads of the police, controls will be strengthened.”

Children under 6 are exempt, as well as people with disabilities and those engaged in sports.

A similar decision has been taken in places across the country - Venice, Arezzo, Florence, Sicily, Milan and Turin. In Milan, the fine for non-compliance will range from 280 euros (if paid within 5 days) to a maximum of 3000 euros.

Bolzano announced two weeks ago that access to the Christmas markets would only be possible with a Green Pass, while in Naples the mayor, Gaetano Manfredi, has regulated access to the streets of the ancient city centre.