New street art for Elimination of Violence Against Women Day 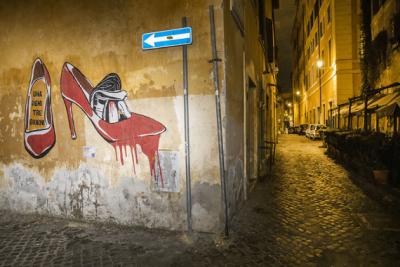 'Every Three Days' by Laika in via del Conservatorio

ROME --Street artist Laika put up a new artwork during Wednesday night to mark the International Day for the Elimination of Violence Against Women on Thursday.

Entitled ‘Every Three Days: If you were in my shoes,’ the image pasted to the wall in Via del Conservatorio depicts a pair of red stilettos, with the words ‘UNA OGNI TRE GIORNI’ (‘one every three days’) written on the insole of one, and a woman with her head in her knees, blood running down her leg, sitting in the other.

"To date,” stated the masked artist, “103 women have been killed since the beginning of the year, 87 in a domestic context of which 60 were victims of their ex or current partner. These numbers are increasing compared to past years.”  Data from the Italian Interior Ministry affirms that, this year alone, violence against women has increased by eight per cent.

“Every year we find ourselves on this symbolic date to sum up a massacre,” continued the artist, “everyone says they are saddened, the usual ritual words are pronounced by the politicians on duty, but then nothing changes. Domestic violence help centres received only two per cent of the funds that were allocated to them in 2020!”

“The truth is, as women, we shouldn't expect help from anyone but our sisters. We will be stronger than acid, your knives, your fists, your insults,” concluded Laika.

The image pays homage to a work by Mexican artist Elina Chauvet called ‘Zapatos Rojos’ or ‘Red Shoes,’ consisting of hundreds of pairs of red shoes, each of them representing a woman who has disappeared in Mexico. 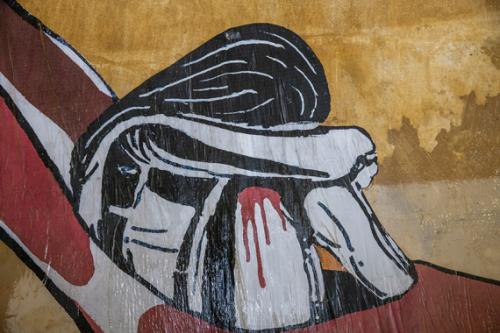