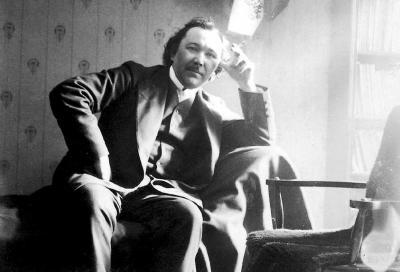 Rome – A plaque dedicated to Finnish national poet, Eino Leino, has been renovated in honour of his translation of Dante Alighieri’s masterpiece, the Divine Comedy during his stay in Rome in the early twentieth century.

On the proposal of the Italian journalist, Gianfranco Nitti, a Finnish correspondent in Italy for over 30 years, the plate was cleaned and restored by the competent office of the Municipality of Rome and ‘re-inaugurated’ on Sept. 13, the same day Dante died in Ravenna in 1321, exactly 700 yars previous.

Mr. Nitti said, “I thought it was a good way to remember two great poets, so far in time and history but linked by the same art of poetry.”

Eino Leino  lived from 1878 to 1926 and translated the poem during his stay in Rome between 1908 and 1909 while living in a guesthouse in the Prati district. The Rome council installed a marble plaque on the façade of the building, Lungotevere Prati 17, to commemorate his stay and his translation. It was unveiled on Feb. 1, 1971 by Finnish President Urho Kekkonen during his State visit in Italy, with the inscription, “in this house in the years 1908 – 1909 the great Finnish poet Eino Leino translated the Divine Comedy with love inspired by universality of Rome.”

The plaque, before & after the restoration 1971-2021, photo by Gianfranco Nitti
Culture
Rome