Politicians 'try to disturb' partnership between Eni and Sonatrach 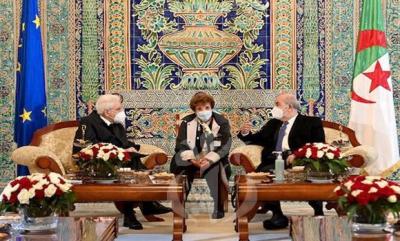 ROME --The state visit of the Italian President Sergio Mattarella to Algiers, has reportedly achieved all its objectives, thanks to the warm welcome given to him by his counterpart, Abdelmadjid Tebboune, and other state leaders.

The Italian press did not fail to highlight the intention of the two presidents to capitalise on the principles of the strategic partnership for greater cooperation at all levels and in the most diverse sectors.

A position shared by the two shores of the Mediterranean, which a clumsy media action based on bizarre arguments wanted to  counter, pointing an accusing finger against the reliability of Algeria in terms of energy supply, in the wake of a recent sovereign decision to not renew a multi-year supply contract, which has come to an end.

Of the attacks, they let us know, coming from environments whose obsession with the North African country, borders on the most serious pathologies and taken up by politicians who would not know how to locate Algeria on a geographical map, some voices, without any embarrassment, have even alerted Eni and the Italian authorities about the "risks of partnership with an unreliable country like Algeria.”

These voices are exploiting the fears of consumers in the face of rising gas prices, to try to pass ideas and positions that the Italian government refrains from adopting and will continue to do so.

Moreover, the source says, in inaugurating the Enrico Mattei Garden in Algiers, President Mattarella not only paid homage to the Italian patriot, friend and supporter of just causes, he also highlighted the excellent relations between the two countries in the energy sector, specifically the solid partnership between the two locomotives, Sonatrach and Eni.

Therefore, it is useful to remind these expert apprentices that Eni produced 19 million barrels of oil and condensates and 1.6 billion cubic meters of natural gas in Algeria in 2020.

And as far as renewable energy is concerned and despite the current pandemic, the photovoltaic capacity installed by this partnership was 5 megawatts and the two groups are working on the expansion of the Bir Rebaa photovoltaic plant and the launch of other similar projects.

And what better denial to these rants, the will expressed by Eni to acquire the assets of British Petroleum in Algeria, which demonstrates that "the six-legged dog" is in Algeria to remain, Sonatrach's faithful partner, both of whom intend to start together exploration and exploitation projects in Africa and elsewhere.

The same expert tells us that in a time of energy transition, large energy groups are reorganizing their economic models, focusing on the most profitable markets and the most reliable partnerships.

Eni, for example, has repeatedly shown its interest in growing development in North Africa and therefore its expansion in Algeria can only lead to Algeria becoming an important energy hub.

Numerous visits made this year on site by the General Manager, Claudio Descalzi confirmed the collaboration between the two countries in this sector, in continuity and according to a win-win logic.

All this data may have escaped those who are trying to try to cloud Algeria’s image - an attempt as useless as it is bizarre.