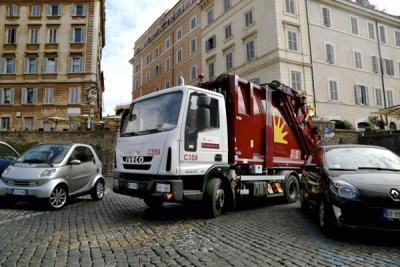 ROME --In an effort to motivate rubbish collectors to carry out the council’s ambitious plan to clean up the streets by Christmas, the city’s waste removal company, Ama, has announced it will give its workers a 360 euro bonus in February if they don’t take any sick days during the next three months, sources said. However, the bonuses will only be given out if the absenteeism rate for the company as a whole drops by 10 per cent.

Ama said that employees who do not miss a single day of work between Nov. 22 and Jan. 9  will receive the full bonus in their February paycheck. Anyone who misses up to three days of work will receive €300, while if they miss up to five, the bonus will drop to €200, with no reward for anyone who takes more than five sick days.

The new mayor of Rome, Roberto Gualtieri, has promised to clean up the city in two months, however to achieve this the workers who shoulder the burden must maximise their efficiency and productivity. Therefore, an agreement entitled "Incentive to increase the attendance rate" was signed Thursday between top management and trade unions “to ensure the full achievement of the objectives set by the extraordinary plan.” If resources are left over from the special fund made available by the Capitol, an additional sum will be shared out in March.

The productivity agreement places two de facto conditions for the bonus. The first is the successful outcome of the operation, namely "total cleaning of all the main streets of Rome, removal of all waste left on the ground around the bins, sanitation of the same and removal of illegal dumps on the sides of the roads.”

The second condition is the 10 per cent drop (at least in December and January) in the sick leave rate among Ama employees, currently exceeding 20 per cent. The agreement serves to "encourage an increase in the attendance rate in all operating sectors, including areas, workshops, garages, collection centers, plants and cemeteries.”

If these two conditions are not met, even those who take no sick days will not receive anything.