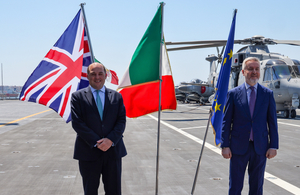 "Italy's attention to the country remains high,” said Guerini, "especially with regard to living conditions and respect for the essential rights of the population.”

The two ministers also discussed the NATO mission in Iraq, which Italy will take over next year and the Mediterranean - with an exchange of views on the situation in Libya.

Minister Guerini highlighted "Italy's historic interest in stability in the Middle East, an area considered to be of strategic interest not only nationally, but also for European and transatlantic security.” With reference to the Command of the NATO Mission in Iraq which will be assigned to Italy next spring, Guerini underlined how "we will try to give new impetus and effectiveness to the mission, in compliance with the decisions that will be taken by the new Executive".

"The Italian Defense" he added "continues to guarantee its support for the continuation of evacuation activities, as part of a joint inter-ministerial effort that has resulted in the creation of a dedicated permanent task force.”

The meeting, which followed those that took place on Sept. 15 in London and June 11 in Augusta, Sicily, was an opportunity to take stock of the international situation, bilateral cooperation and collaboration in the defence industry.

The two ministers agreed on the need to avoid situations that may increase tension on the borders of Ukraine and Belarus, as well as the need for a very firm response to provocations towards allied countries.

During the interview the two minsters showed a good level of understanding regarding industrial cooperation, which "must remain at the center of our report, given the promising opportunities it offers for the respective industrial sectors to increase synergy at an operational level," Minister Guerini said.

"Italy and the United Kingdom have a long tradition of cooperation in the defence sector and work together on important cooperation programs, starting with Tempest,” a future combat air system for service entry in the middle of next decade. “It is a collaboration in which the two countries share the commitment on an equal basis.”

"I believe it is fundamental" added Guerini, "that cooperation in the defense industry between our countries is strengthened through a balanced sharing of technologies and know-how, in order to make Tempest the new reference model for the aerospace industry and for future international collaborations.”