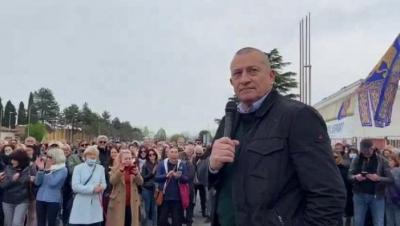 Riccardo Szumski is vocal about his opposition to Covid-19 vaccines

TREVISO -- The town mayor of Santa Lucia di Piave who was also a family GP has been struck off by the Treviso Medical Association due to his stance against Covid vaccination, said Il Fatto Quotidiano.

Riccardo Szumski, 69, cited health reasons for his refusal to be vaccinated and when the Green Pass law came into force - obliging people to either be vaccinated or equivalent to enter their workplace -  he moved his mayoral office to a gazebo in the town square. He participated in ‘No Green Pass’ demonstrations, the most recent a few days ago in Padua.

His position was reported by medical leaders in Treviso to the Order of Doctors, who monitored his public statements and professional activity, such as home Covid remedies he prescribed to patients and vaccination exemption certificates for people not under his care.

Luigino Guarini, president of the Treviso Order, said, "our position on vaccines is clear and in line with scientific evidence.”

“Any public statement regarding vaccines that could be understood as alarmist disinformation implying mass vaccination is dangerous must be ethically prosecutable.”

Guarini added, “the doctor promotes and implements accessible, transparent, rigorous and prudent health information, based on acquired scientific knowledge and does not disclose information that feeds unfounded expectations or fears or anything prejudice to the public interest.”

Shortly before becoming aware of being struck off, Szumski wrote on Facebook, "enough with this story of being a anti-vax - I am vaccinating my patients for flu who want it, as I do every year. I have given the covid vaccine to some patients who wanted it.”

“Because I support free will, I will not do something that I’m not convinced of (and I’m starting to think I’ve made the right decision),” he said, referring to covid vaccination.

Szumski was also recently denounced by The General Investigations and Special Operations Division (DIGOS) for a statement deemed harmful by the President of the Republic, Sergio Mattarella. At the assembly of the municipalities of Italy, he said he was “a traitor, rather than a guarantor of the Constitution.”