Obituary: Tullio Pironti, boxer, book-seller and publisher with an appetite for risk 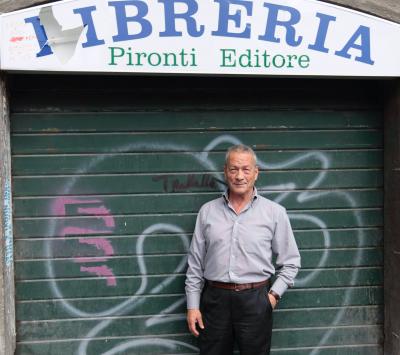 ROME — Tullio Pironti, who has died of a heart attack at the age of 84, came from a family of Neapolitan book-sellers and distinguished himself as a courageous publisher of books that exposed the corruption of Italy’s political establishment and of the Vatican.
The youngest of six children, as a child he experienced the hunger and danger of life in war-time Naples, evacuated for a while to the countryside by his book-seller father. His appetite for adventure was satisfied by a career as an amateur boxer, which saw him selected for the national boxing team as a welterweight at the same time as the great Nino Benvenuti. He survived 50 matches without ever being knocked out but gave up the sport after being caught on the chin by a powerful punch that sent him to the mat and left him dazed and confused for hours.
Having taken over the family bookshop from his father, he decided to dip his toe into the publishing world when a friend drew his attention to the newspaper articles of Mimmo Carratelli from the 1972 Munich Olympics. Carratelli reworked the material and “Munich ’72. The Night of the Fedayin” was published later that year.
Pironti called his new publishing company “Libreria Tullio Pironti” (Tullio Pironti Bookshop) and continued to run it out of his Piazza Dante store for the rest of his life.
The work caught the attention of intellectuals from Naples’ Orientale University who persuaded him to publish a journal on philosophy and sociology titled “Metaphorein”. A young Massimo Cacciari, a philosopher who would go on to become mayor of Venice, was among the contributors.
Pironti’s collaboration with the university professors was brought to an end by his next book, “Il Camorrista”, penned by the celebrated RAI journalist Giuseppe Marrazzo. Pironti waylaid Marrazzo while he was eating dinner in a Naples restaurant, gaining his confidence and persuading him to take on a biography of Raffaele Cutolo, the publicity-loving founder of the Nuova Camorra Organizzata crime organisation.
Some of the Metaphorein professors objected to the subject matter of the mobster biography and terminated their collaboration. “Il Camorrista” was a runaway success, quickly selling 50,000 copies and spawning a movie by the director Giuseppe Tornatore, the first of his long and illustrious career.
Marrazzo was then instrumental in procuring Pironti’s next publishing hit, an Italian translation of “The Vatican Connection” by the New York Times journalist Richard Hammer. It took considerable guts to tackle the topic of the Camorra in Naples in the 1970s and the subject of Vatican financial malfeasance was similarly daunting.
Powerful interests in the United States had attempted to discourage Hammer from proceeding with his exposé of the financial shenanigans of Archbishop Paul Marcinkus and the mafia-linked Sicilian financier Michele Sindona. In Italy the Italian version was swiftly impounded after one of its protagonists brought a suit for defamation. Pironti won the court case in Naples and the resulting publicity pushed the book up the best-seller charts.
The maverick publisher followed up this challenge to the power of the Vatican by taking on the Italian translation of David Yallop’s “In God’s Name”, about the alleged murder of Pope John Paul I. It would continue flying off the shelves for decades.
His eclectic list of authors would go on to include Raymond Carver, Don De Lillo and the Egyptian Nobel prize winner Naghib Mahfuz. With the help of his friend, the poet and translator Fernanda Pivano, he succeeded in bagging the rights to Bret Easton Ellis in a telephone auction. He made a bid of Lire 55 million — a princely sum at the time — having been told that the major publishing houses had to call a board meeting if they wanted to offer more than Lire 50 million.
“The recklessness of the gambler carried the day,” Pironti said later.
Gambling was indeed in his blood, and it is said that some of the money that might otherwise have found its way as royalties to his authors trickled instead onto the green baize tables of the Venice casino.
A charming host and courageous campaigner for social causes, Pironti was still welcoming visitors to his bookshop until shortly before his death.
Having had books brazenly stolen from his shop and a hole drilled in his wall to break into a neighbouring bank, he had few illusions about the city he had inhabited all his life.
In an interview with La Stampa he commented fatalistically on the reiterated idea of a “Neapolitan Renaissance”. “It’s on the rubbish heap like everything else. A city with a unique tourist vocation, that frightens people away.” The world-weary realism didn’t prevent him from loving it and serving it until the end.