Azerbaijan asks Vatican for help on peace dialogue with Armenia 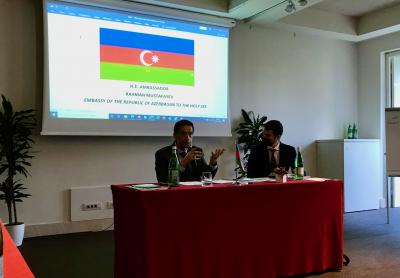 ROME --"Azerbaijan wants to deepen cooperation with the Vatican: we consider it an essential bridge," Azerbaijani Ambassador to the Vatican, Rahman Mustafayev, told journalists at a press conference to mark the opening in Rome of the central Asian republic’s new embassy to the Holy See.

“We are in contact with religious leaders of various denominations and I can say with certainty there have never been any misunderstandings from a religious point of view in Azerbaijan. This is demonstrated by the fact that one of our delegations that visited the Vatican last February is made up of Catholics, Orthodox, Muslims and representatives of other confessions," said the ambassador. “Our religious leaders are in contact with their counterparts in other countries. This is an essential bridge for us,” he insisted.

"Azerbaijan acted on the basis of international law, following the dictates of Article 51 of the United Nations Charter. All that has been done is to liberate the territory occupied since 1991 according to our rights,” explained Mustafayev. “In France there are some politicians who claim that the one between Armenia and Azerbaijan was a religious war. On more than one occasion I have asked the parliamentarians who have expressed themselves in this sense to provide me with explanations on the matter. Before the war of the 1990s in the region there was a multi-religious and multi-ethnic community, there were mosques and churches, a group of people that covered 48 ethnic minorities," the ambassador underlined. "In Armenia, 99.9 percent of the people are Armenian and there is no multiculturalism. In Baku, in one of the most important neighborhoods, we have a mosque and a church that are close to each other, and this is an example of our multi-religious approach. We want to strengthen this aspect which is already typical in our country,” said the ambassador.

A peace treaty between Azerbaijan and Armenia would be the answer to all the problems in the Caucasus region, Mustafayev added during the press conference. “We must first of all delimit our borders and sign a peace agreement. There were meetings at the level of foreign ministers, mediated by the Russian foreign minister, Sergej Lavrov, and the French foreign minister Jean-Yves Le Drian. Much has been done and we have delivered a draft of the peace plan for which we are awaiting a response,” added the ambassador. “We need a solution. Armenia is our neighbour and in some respects also depends on us for international connections and transport. There are problems in the region but we have to address them by finding a peace agreement,” continued Mustafayev.

"Armenia has provided positive signals, and we need these signals at the international level as well. We absolutely must send a positive message and I also asked the Vatican to express itself in this sense because it is important to achieve this peace,” continued the diplomat, observing that “Azerbaijan and Armenia cannot be separated from each other because they are neighbours, they cannot find different paths. We have to find a way to communicate.”

“I think that sooner or later an agreement will be found and that we will be able to bring stability to the region.”

“We have to do this through diplomacy and politics and the OSCE Minsk Group (the body responsible for mediating between the two countries) is already adapting to this new situation in the region," concluded Mustafayev.

“Azerbaijan,” said the diplomat, “has returned to Armenia all the prisoners of war captured during the conflict last year.”

“When we speak of prisoners of war, we are referring to those who were captured during the conflict. The people arrested after the signing of the trilateral agreement on 9 November, on the other hand, are criminals.”

“The OSCE Minsk Group (the body responsible for mediating between the two countries, co-chaired by USA, Russia and France) has never mentioned these people,” said Mustafayev.  “After the signing of the agreements there were investigations and I can guarantee that all the prisoners of war have been sent home. In addition, during our post-war research activities, we found about 1,500 bodies of Armenian citizens and two Azerbaijani citizens died in these activities," explained the ambassador, stating that any insinuation about prisoners of war is" mere propaganda.”

The government of Azerbaijan has also concluded an energy agreement with British oil producer, BP, for the creation of a solar energy facility as part of the country’s plan to reconstruct the areas seized from Armenia in the 2020 Nagorno-Karabakh conflict.

During the conference, the ambassador drew attention to the parts of Azerbaijan (previously parts of Nagorno-Karabakh and surrounding Armenian-occupied areas), which have suffered “apocalyptic” damage from war. He called it “the Hiroshima of the Caucuses,” and stressed that everything must be “re-built from zero.”

“We do not want to reconstruct in a Soviet way,” said Mustafayev, but rather “smart cities with renewable energy and a digital, green economy.”

“BP oil and gas company will assist us.” The agreement is part of Azerbaijan’s desire to implement sustainable energy projects in the region.

Azerbaijan itself has allotted around one billion euros from its budget to reconstruct areas that have lost essentially all infrastructure, communication and transport lines. The first ‘smart village’ is planned to be implemented in Aghaly in the Zangilan district, with completion in 2022.

Other projects include the near-complete Akhmedbeyli-Fuzuli-Shusha motorway, also known as ‘Victory Road,’ and Fuzuli airport which has already started its first test flights. According to the Azerbaijan government, many emblematic cultural buildings and historical monuments have been restored in the city of Shusha.

Regarding the deep-rooted social, cultural and political problems in the region, the ambassador said his government are, "confident and positive in their expectations."

"Peace will take a long time but with a constructive approach we will achieve it,” said Mustafayev.