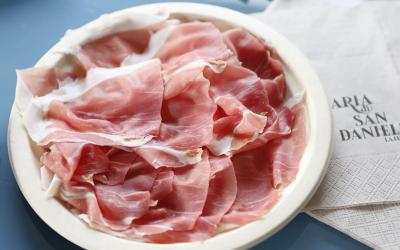 UDINE –To preserve the character of their food against the modern threat of food “homogenisation," the Consortium of San Daniele Prosciutto marked its 60th anniversary by relaunching its objectives for the future with the key focus as sustainability – encompassing consideration for the environment, animals and people.

The president of the Friuli-Venezia Giulia Region, Massimiliano Fedriga, said in the Consortium’s recent press conference, “Politics must defend against the homogenisation of agri-food production and instead enhance the diversity of the territories.”

“Tools such as Nutri-Score damage the agri-food sector,” said Federiga, referring to the standardised EU labels displaying a food’s fat and sugar content in an effort to help the consumer make ‘healthier’ choices, but disregarding factors such as how natural a product is - undoubtedly far more relevant to health.

Stefano Patuanelli, Minister of Agricultural, Food and Forestry Policies said, “the Nutri-Score problem is the attempt to standardise and confuse health needs with food products, omitting the healthy balance and the way we consume all foods.”

He emphasised, “it is crucial to protect and promote food that is based on distinctiveness, excellence, culture and a lively connection with the territory and traditions - the beating heart of DOP and IGP products.”

He praised San Daniele as an example to other artisan products, highlighting its traceability in the supply chain, quality control and consideration for the environment such as strictly regulated water use.

Giuseppe Villani, President of the Consortium, explained their approach to sustainability as a holistic concept - “it’s not just about environment, but respect for people, correct use of facilities and ethical management of local resources, as well as consideration for the consumers.”

In 1961, producers, entrepreneurs and citizens of San Daniele del Friuli created the consortium to promote and protect the San Daniele ham brand.

Over the last decade there have been numerous innovation initiatives in the supply chain, such as the introduction of a digital tracking system for the products and treating leftover salt from production to reuse in the tanning industry or as road de-icer.

"In the future,” said Mario Emilio Cichetti, Director of the Consortium, “the right balance must be found between the need to produce and ethics towards the environment and animal welfare, thus generating a knock-on improvement in quality of life.”

“Let’s hope all of our consortium members continue to feel young,” said Villani, “because young people always manage to have a vision based on the future.”