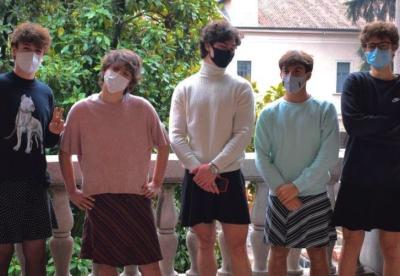 MONZA --Teenage boys at Zucchi High School wore skirts to class to demonstrate their objection to “sexism” and “toxic masculinity."

The initiative, called ‘Zucchingonna’ (‘gonna’ is Italian for skirt), was organised by the pupils, with support from the headmistress, Rosalia Natalizi Baldi. She commented, "I advised them to defend respect for gender equality not only with one-off demonstrations, but also in everyday life. However, for my part there was no censorship."

The protest has attracted attention in Italy given it is the first of its kind. A comparable demonstration has only been seen in Valladolid, north-western Spain, when a maths teacher posted a photo of himself while teaching and wearing a skirt, in solidarity with a male pupil who was suspended and sent to a psychologist after having worn a feminine dress.

In Monza, no teachers took part but equally but no one objected to the action. The headmistress explained, “pupils have chosen to be audacious because they want to be visible defending gender equality.”

The students wrote on social media, “skirts are considered a typically feminine garment, often at the centre of debates around appropriate clothing, especially in relation to a school context. If it is a man who wears the skirt, this is often considered reprehensible, since it is seen as a "less masculine" and "woman’s" garment,” an assumption the boys aim to overturn.

The headmistress said, "my only concern is that we are not limited to the stage, but that certain values ​​are embodied in their lives.”

“Slogans are clearly not enough, it cannot be a trend but we need to confront and grow together with different points of view.”