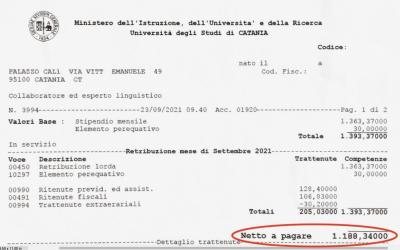 CATANIA -- In many of Italy’s universities, salaries for foreign language lecturers or ‘lettori’ in Italian, are not compliant with European guidelines. The situation must be resolved before the end of November to avoid legal repercussions from the European Union.

A lettore working at the University of Catania earns almost 1000 euros less than his or her counterpart in Bergamo or Salento. The reason is non-compliance of contracts with European rules. This concerns not only Catania but numerous universities in Italy. For this reason, on Sept. 23, the EU put the Italian state in default, asking it to adjust its salaries by Nov. 23.

“Since 1989 there have been six judgements from the European Court of Justice, but many universities still don’t recognise our rights,” said Professor David Petrie, head of the Association of Foreign Lecturers in Italy (Allsi).

The University of Catania doesn’t see it that way - director Giovanni La Via, said, “before the summer we reached an agreement with the lecturers’ lawyers, who reacted positively to a new contract. Meanwhile, trade unions and the university ministry have opened national talks, so the Catania lecturers have decided not to sign in anticipation of further improvements.”

“Either way,” warns Prof. Petrie, “the clock is ticking. Without a solution by November, the infringement (proceedings) could be triggered.”

The variation in treatment between the different universities is evident from looking at the payslips. Sicilian news agency, FocuSicilia, released photos of payslips from certain universities for September and October this year. One can see that a lettore employed in Catania earns less than 1200 euros net pay. This university, according to Prof. Petrie, “is among the worst,” but there are also universities “in which the lecturers earn less.”

Once again, the university director defended his institution saying, “Catania’s renumeration is in line with current legislation.”

“Over the years,” he adds, “there have been various judgements that have proved us right about the lettori.”

The pay discrepancy between institutions as a foreign lecturer is huge - for the same service, one employed by the University of Salento earns around 2200 euros a month, while at the University of Bergamo they earn 2800. The University of Milan’s wage is much lower at 1300 euros – though it still pays more than Catania.

The question of how much the lettori get paid is not a new subject. Back in 2001, a judgement from the European Court of Justice committed universities to guarantee the lecturers - subsequently called ‘linguistic collaborators’ - “financial treatment corresponding to that of a tenured researcher with a permanent contract, effective from the first day of recruitment.” However, Italian bureaucracy can mean a long wait between making a plan and putting it into action.

The treatment of the lettori was transposed into law 63 in 2004, which according to Prof. Petrie "would have put an end to discrimination.” However, “it is a pity that the rule,” the professor continued, “was ‘nullified’ by law 240 in 2010 (better known as the Gelmini reform), which has brought back the same treatment for lecturers.”

The latest gesture was decree 756 in 2019, signed by the Ministry of Universities and Research, together with the Ministry of Finance, which established the "supplementary contract model” for lettori serving in Italian universities.

Unfortunately, it will be another two years until a new contract is established. The University of Milan also proposed new agreements to lettori before the summer. "While seniority and back issues were recognised in that university, nothing of the sort happened at Catania," says Prof. Petrie. For this reason, “none of the lettori on duty agreed to sign the new contract”.

It is a delicate situation with dozens of disputes currently being had between lecturers and Catania University. “These colleagues would have the right to the arrears of the salary and the state pension that weren’t paid from the date of first hiring.” At this point, according to the general manager of Catania, the solution can only come from Rome. "We are awaiting the decision of the ministerial table, and we hope that the situation can be resolved as soon as possible.”

Despite the unacceptable situation in Catania, there are places in Sicily where lettori’s salaries are equitable. According to Prof. Petrie, the University of Palermo solved the situation back in 1998. “Since then, the institution has applied the same pay to readers as established researchers on a fixed-term basis. The university was the first to do this” and it is an “extremely positive” solution.

This model that has not, however, been replicated in other Italian universities.” If other universities had followed it too, the problem we are talking about would not exist,” states the Allsi president. As for the University of Messina, there are no disputes over salaries, demonstrating how the situation is variable, even just in Sicily.

In general, the road to reach the solution of the problem appears to be uphill. “It is not just the lettori who pay the price,” Prof. Petrie adds, “huge amounts of public resources are wasted in lawsuits and appeals, when the same funds could be used for teaching.” He notes that universities are not the only culprits. "The state is co-responsible, because it does not provide adequate funding to the universities.”

“Fundamentally,” concludes Prof. Petrie, “it’s all a question of budget, which for teachers means the classic ‘passing of the buck.’ The state, responsible for ensuring the application of the six judgments of the European Court, does not want to pay. Universities say they don't have enough money. We however will continue to work to ensure that lettori have their rights recognised.”

Valerio Musumeci (b. Catania, 1992) is a freelance journalist and writer. In 2015 he made his debut with the historical-political pamphlet 'Cornutissima semmai. Controcanto della Sicilia buttanissima ', Circolo Poudhron, with a preface by the writer Vania Lucia Gaito, included in the bibliography of the workshop "Landscapes of the mafia" by the University of Catania. In 2017, for the same publisher, he edited an essay on Berlusconi in the book ‘L'Italia tradita. Storia del Belpaese dal miracolo al declino,’ with a preface by economist Nino Galloni. In 2021 he published his first novel, ‘Agata Rubata’, Bonfirraro Editore. 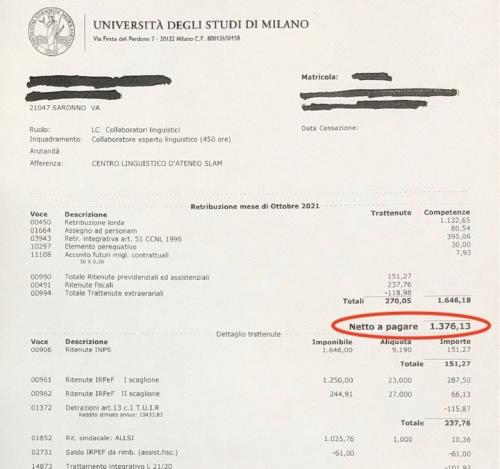 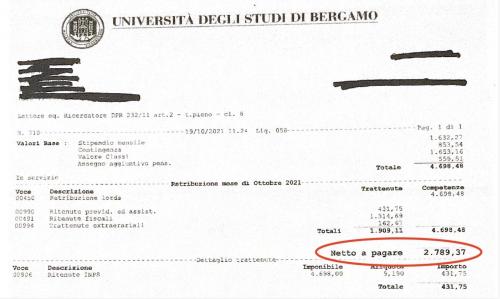