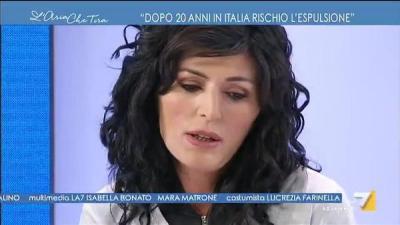 Sejdini during the television interview Nov. 3

ROME --Adelina Sejdini, an Albanian woman who denounced a number of her country’s prostitution mafia mobsters, has committed suicide after struggling to obtain Italian citizenship, police said. The 46-year-old had come to Rome from her home in Pavia to expedite her case, saying "If I go back to Albania they will kill me.”

Sejdini had been ill with cancer and frequently in hospital. She was brought to Italy in 1996, aged 22, by Albanian mafia who exploited her and many others as prostitutes in Italy. She managed to escape and inform police of the gang, leading to 40 arrests and a further 80 people reported. Sejdini subsequently worked with ‘City Angels’ to help rescue young victims of prostitution.

She had repeatedly asked to be able to obtain Italian citizenship. Desperation set in after the latest renewal of her residence permit, when she was no longer recognised as stateless, indicating Albanian citizenship.

"Not only that,” said Sejdini in a television interview on Nov. 3, “it says that I work. As a result, I can no longer have the benefits and disability pension I need to live.”

With her new status, Sejdini would encounter enormous difficulty in being given a council house. At the end of October she decided to go to Rome, despite her precarious health conditions, hoping to meet President Mattarella or at least some officials from the Interior Ministry.

On Oct. 28, the desperate woman set herself on fire in what may have been a protest and/or a suicide attempt. She was rescued and transported to the Santo Spirito hospital with severe burns. At the time Sejdini lamented, "I applied for public housing, but now I dream of it. The documents no longer match. And I cannot accept Albanian citizenship, from the moment they wrote it to me, I have nightmares. I'd rather kill myself,” she warned.

“If I go back to Albania I am a dead woman,” she stressed in the recent TV interview. “I'm afraid of being killed by those I had arrested.”

On Saturday she committed suicide by launching herself from a railway overpass. An investigation into the tragedy is being carried out by the Rome Termini Railway Police.