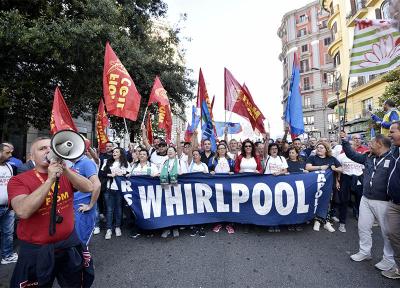 NAPLES - The city’s tribunal has dismissed the accusation of ‘anti-union conduct’ put forward by the metalworkers' trade unions (FIOM) against US company Whirlpool for laying off over 300 employees at its Via Argine plant, judicial sources said Thursday.

The appeal filed by the trade unions denounced the company's ‘anti-union conduct’ with reference to agreements signed between 2015 and 2018 by the government, the company and the trade unions, which ‘ensured productive future employment’ at the site, only to then be disregarded.

The judge made their decision based on the fact that there had been a decline in market volumes and further highlighted that trade unions had rejected the proposal for the sale of the business unit by Whirlpool in August 2019.

FIOM lawyer Lello Ferrara said he was "totally dissatisfied with the decision" adding "not only from the point of view of the outcome of the trial, but even more so for the arguments and reasons given, which see the defensive theses of the company neglecting and not properly taking into consideration the arguments and the consequent legal issues raised at the basis of the appeal.”

"In today's assembly, in the light of the dispatch of the dismissal letters, confirmation that the struggle of Whirlpool workers continues,” said the general secretary of Naples FIOM-CGIL unions, Rosario Rappa. “For us, the goal of guaranteeing work resumption in the via Argine plant is the mandate we have received from the workers.”

“Now it is necessary and urgent that the government, as it had undertaken to do, convenes the table with the ministers Andrea Orlando and Giancarlo Giorgetti to find ways to give employment continuity to workers and accelerate the process of setting up and discussing the industrial plan of the consortium.”

“For us the goal remains the same," she stated, "the dispute will be closed for us when we return to production at the Naples site and all the workers are employed."

The Mayor of Naples, Gaetano Manfredi, expressed solidarity with the workers, saying "we must align with Whirlpool employees who are an example of what the defence of work, business and industry must be in our territory.”

“Certainly it takes commitment to guarantee them a working future and I know that the government is working with the consortium of companies. This should guarantee a restart of the site with solid industrial prospects, quickly, by the end of the year.”