Trianon Theatre 'reborn' between past and future 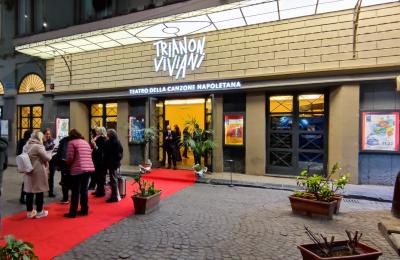 This virtual space, conceived by the artistic director Marisa Laurito and designed by Bruno Garofalo, offers the public the opportunity to immerse themselves in the history of Neapolitan songs, thanks to the vast program of digitisation of cultural, tangible and intangible assets, promoted by the Campania Region and implemented by Scabec, a regional company that elevates local culture.

Thanks to digital systems, visitors can virtually enter a Naples of past times, being able to relive a multisensory experience through the history of Neapolitan song. The Room of Wonders provides an "immersive walk" - lasting 30 minutes - in sounds, colors and moving images. The period stretches from the end of the 19th century to 1940, a time span in which the greatest number of musicians and poets were engaged in the production of the so-called “classical” song. The period documents are interspersed with contemporary reinterpretations of the chosen music, in the philological respect of both the scores and the texts.

The walk is divided into three thematic paths. The first is dedicated to the market, which corresponds to the dynamism of the people in the streets, for which songs inspired by the sellers were chosen. The second is dedicated to the sea, another frequently occurring theme of the classic Neapolitan song, in which the visitor can immerse himself in marine scenarios and serenades. The third is a scenic route in Campania, from the Amalfi Coast to the hinterland.

Vintage photos, paintings, and an environmental reconstruction in costume, provide a journey through time and space in one of the richest contexts in the history of the song.

"With the Trianon Viviani, Naples finally has a temple, which encloses, protects and spreads our great musical tradition even abroad,” comments Ms. Marisa Laurito with pride.

The opening of the Room of Wonders coincided with the inaugural show of the 2021/2022 season "Adagio Napoletano. Cantata d’ammore,” a musical with the Stabile company of the Neapolitan Song written and directed by Bruno Garofalo.

By the end of the year the Trianon Viviani will also open the Room of Memory, a public space, managed by Pasquale Scialò, to access a complete use of the heritage of Neapolitan song and the musical cultures of Campania through the SoNa portal, developed in within the Campania Digital Culture Ecosystem - ArCCa Project, promoted by the Campania Region and implemented by Scabec.

In this Room, through tactile tables and holographic display cases, it will be possible to enjoy digital content from the golden age of the 19th century to the present day - audio recordings, printed scores, autographed manuscripts, playbills, posters, room programs, photographs, caricatures and film.

The TrianonViviani Theatre, established in 1911, and with over a century of history behind it, after a troubled period of economic and financial difficulties that saw production stop for two and a half years and the theater on the verge of bankruptcy and sale to the auction, has returned to operation. Its artistic director Marisa Laurito, a talented and popular actress and singer, aims to create an active space of cultural and social animation, attentive to traditional heritage as much as to new languages, a unique production center that also intends to position itself positively in the wider tourism and leisure market. 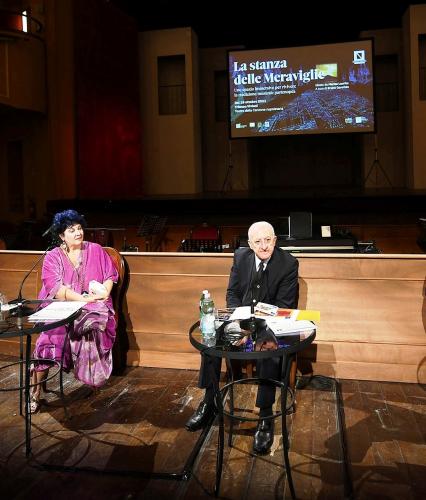