Opinion: Italy - the world observes and is silent 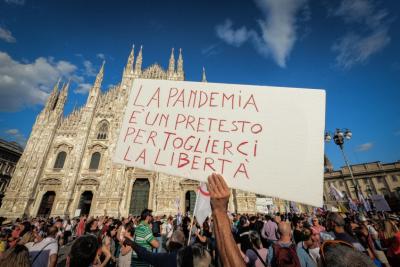 NAPLES - In the dark and sad days of lockdown, the one consolation was everyone was able to reflect for longer. Thinking thus often turned towards the many aggressions suffered unknowingly by life, preparing us for new pitfalls perpetrated and set up knowingly by scientists who worked exclusively for mere interests or unpreparedness, forgetting, in those days, that they should only be men of true Science.

We have witnessed broadcasts from the ‘crème de la crème’ of the medical science community across the nation’s television screens - gentlemen that have done nothing but create a climate of widespread anxiety pervading public opinion that, initially unaware, was leaning towards the vaccine.

The already disappointing dramas of the health sector, alas, has also been joined by politics as if the virus were something that belonged to the right and the left. To these disappointing and mediocre dramas was added some politicians, even of national calibre, who portrayed themselves walking along deserted streets without a mask.

And here we are at these days’ marches and many demonstrations that contribute considerably to create further inconvenience to our beautiful little country, to commerce, to those who get up in the morning and have to go to work, to those who go to school.

But, I wonder, where has dignity gone? Is it just an abstract concept while everyone lives according to their interests? All this disorder has only created a situation of greater uncertainty for the weakest from an economic point of view and for the most fragile from an emotional and psychological point of view, creating other maladjustments to the point of making someone lose their mind. It can’t be this way.

People watch, but are silent.

I was recently in Milan for work and I found myself in front of small groups of so-called demonstrators. Piazza Duomo was full of people, but they were tourists who wanted to visit the city. Probably only a tenth of those present in Piazza Duomo, which can hold about 40,000 people, were women and men who demonstrated - about 2-3,000 people circumscribed by the riot police cordon. They were noisy, they tried to be heard and noticed, but can such a small number of people dictate the law over the entire population? Everyone is free to express what he wants, but I believe that one’s own freedom ends where the freedom of others begins; the freedom of each one must absolutely not affect the life of those who must get up in the morning and do an honest day’s work to live with dignity. We need to reflect. It is a right to strike, but not when it burdens an entire country.

Doctors must return to speaking to all public opinion and must do so by scientifically expressing what still awaits us with regard to the spread of Covid-19. We no longer want to see TV diatribes, but we demand to be informed without having any kind of fear. Doctors must return to their institutional function.

We must fight together, but fighting does not mean paralysing or impeding the lives of others. We must resist because the virus must certainly be defeated, but make sure that everything returns to its place, or rather that we begin to live with more strength and courage, hopefully with a progressive and improved economic, but also ethical, development.

In order not to forget what coronavirus was and still is, I’d like to offer you some words of mine that I wrote in those unforgettable days of fear, uncertainty and loneliness, but with the hope in the heart of a future rebirth.

In this sunny spring,

their perfumes diffuse freely in the air.

Thus nature paints itself with life.

The most beautiful flower,

the flower that rushed accustomed to omnipotence,

that with difficulty stopped at the red light

along the streets of dreams,

today closed between walls and walls of stone,

thinks, is afraid and is silent.

Reflect human creature from the remains of ashes!

With diligence know how to guide the future rudder,

live with diligence among the living without the fear of dying.

In God you are the life that,