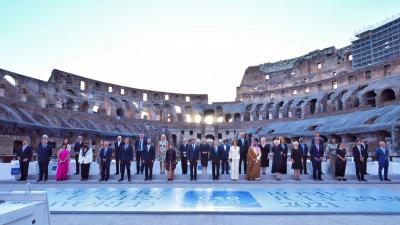 The G20 Culture Ministers in the Colosseum

The first major in-person global summit since the start of the pandemic will also focus on how to help developing countries to immunize the population.

China and Russia will participate virtually at this weekend’s G20 in Rome and their contribution to proceedings is crucial, with the former producing the most greenhouse gases of any country in the world.

There have been several blows to this year’s COP, not least the decision of Australia, one of the main coal exporters, to postpone the goal of net zero emissions to 2050.

The UN has also made an appeal for a more decisive response from the global leaders, with the risk of environmental catastrophe looming.

The 2015 Paris Agreement stipulated that the world must limit global warming to 1.5 degrees. Many countries have already failed to comply with the rules set out in Paris. However there is hope that, by Friday, an agreement can be reached.

At the end of last week’s EU Summit, Draghi said, “without the involvement of the major world economies, we will not be able to respect The Paris Agreement and contain global warming by one and a half degrees.”

“The EU is responsible for just 8% of global emissions. The G20 countries as a whole produce about three quarters of the total. The Prime Minister emphasised, “the climate crisis can only be managed if all the major global players decide to act incisively, coordinated and simultaneously.”

This principle also applies to the effort to provide vaccines to developing countries. Organising an immunisation campaign requires health facilities, qualified personnel and the ability to store vaccines at the right temperature - all major obstacles.