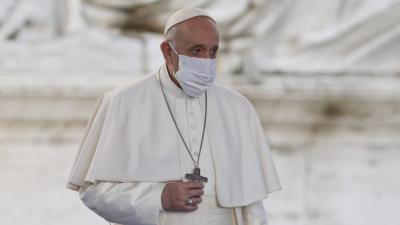 He is one of the first in the country to receive the booster jab, not so much for his status as his age. State spokesperson Matteo Bruni said, "in the second half of October, the Health and Hygiene Directorate of the Vatican City State began administering the third dose of vaccine against Covid-19, giving priority to people over sixty and to people with fragility.” The Pope will celebrate his 85th birthday in December.

For the same reason, it is likely that the pontiff emeritus Benedict XVI, age 94, has received the new injection as well.

Pope Francis received his first dose in January, together with the men of the Swiss Guard, who are considered higher priority, because of their exposure at the entrances to the Vatican and their proximity to the pope.

From the earliest stages of the campaign,  Pope Francis has been vocal in his support of the vaccines. He has openly sided against some skeptical Church members, asking all of his associates to receive it. saying, “vaccinating against Covid is an act of love for oneself and for all peoples. A way of promoting the common good.”

In a video message to his Latin America listeners in August, the pope said, “vaccinating oneself is an act of love for oneself and for all peoples. Love is also social and political, it is universal, always overflowing with small gestures of personal charity capable of transforming and improving societies.”

He maintains, "vaccinating oneself is a way of promoting the common good.”