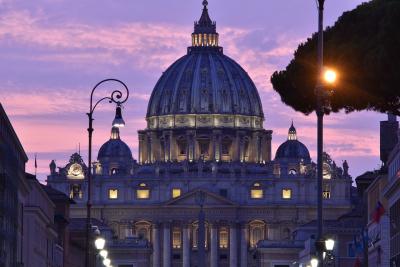 VATICAN CITY -More than 70 religious institutions from around the world confirmed a divestment in fossil fuels amounting to 4.2 billion dollars, while hundreds of thousands of religious people are petitioning world leaders.

Five days before the start of the UN Climate Change Conference (COP26) in Glasgow and four days before the G20 Leaders’ Summit in Rome, where representatives from the world’s twenty largest economies will come together, the largest joint divestment by religious organizations was made public. Some 72 institutions from 10 different countries, with more than 4.2 billion dollars in combined assets under management, reported their withdrawal from fossil fuel investment.

The news follows the recent appeal by Pope Francis, along with other religious leaders, to world governments urging them to address the “unprecedented ecological crisis,” and after thousands of Catholics around the world signed the 'Healthy Planet, Healthy People' petition together with more than 300 organizations, to demand urgent and ambitious action on the current ecological crisis from the representatives attending COP26.

According to the report released today, more than 1,485 institutions, representing 39 trillion dollars of combined assets, have publicly committed to some form of divestment in the last few years, including full or partial commitments. Religious institutions account for more than 35 percent of the total. At the same time, more than 100,000 people have already joined the petition addressed to COP15 president, Li Ganjie, COP26 president, Alok Sharma, and all the political leaders participating in these meetings.

Tomas Insua, Executive Director of the Laudato Si' Movement, said, "people of faith are divesting on a large scale from dirty coal, oil and gas, demanding the G20 in Rome to finally conclude that there is no future in fossil fuel financing. In Francis’ words, “enough of the thirst for profit that drives the fossil fuel industry to destroy our common home,” and he invited all the faithful to join in this demand by signing the petition addressed to the leaders participating in COP26.

The announcement of divestment is in line with the 2020 Vatican recommendation made through a document published on the occasion of the fifth anniversary of the Laudato Si Encyclical which addresses the need to protect nature, life and defenseless people by abandoning these investments to back climate solutions.

“The climate crisis and biodiversity collapse are twin crises. A warming world is exacerbating the spiraling loss of blameless species. And further loss of nature will jeopardize our capacity to deliver on the 1.5 degrees limit to global warming. We are hurtling towards a global catastrophe, one that looks to be irreversible for our common home, with tragic loss of life across all creation - unless we act now with great urgency,” states the 'Healthy Planet, Healthy People' petition.