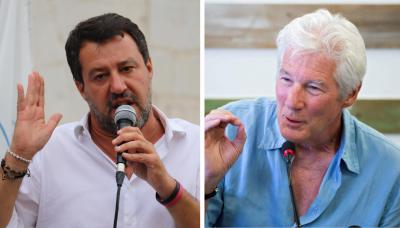 PALERMO – The actor Richard Gere will testify alongside senior member of the Italian government in the trial againt far-right party leader Matteo Salvini, judicial sources confirmed Saturday. The former Interior Minister is accused of preventing a ship of rescued migrants from landing in Italy in 2015. If convicted, he could face up to 15 years in jail.

Gere had been on holiday in Italy when he learned of the crisis - the Spanish ship, 'Open Arms', was overcrowded with rescued migrants, lacking provisions and with no place to stop. The actor travelled to the boat to volunteer help. In total the ship was stuck at sea for 19 days.

Salvini, who was the Interior Minister at the time of the alleged crime, mocked Gere's inclusion in the court, saying “tell me, how serious is a trial in which Richard Gere will come from Hollywood to testify about my wickedness?”

The League party leader has belittled the case multiple times, On Saturday, he said to journalists, “I hope it will be over as soon as possible, because there are more serious things to deal with.”

The next hearing is scheduled for Dec. 17.