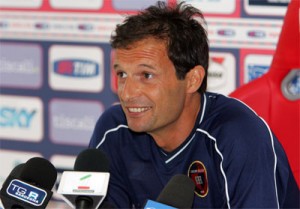 ROME — No matter what happens in the match against Roma this week-end, AC Milan will head into the New Year at the top of the league table. They improved their position at the top with a 3-0 victory away to Bologna last week, a week when former leaders Lazio were defeated, in the dying seconds, by Juventus of Turin. These results stretched Milan’s lead to six points and mean that Massimiliano Allegri and his team owned by Silvio Berlusconi will spend the winter break as favourites for the title.

What will please Allegri even more than this symmetry is the fact that his summer signings are delivering the goods. There was a time, not so long ago, when Kevin-Prince Boateng was part of an abject Portsmouth FC side, relegated from the Premier League with a dismal points tally and without much of a fight. Although he was one of Ghana’s stars in the World Cup many in England were surprised when Milan expressed their interest. It looks now like an inspired signing. Boateng has provided the elements that were missing from this veteran side — pace and dynamism.

Robinho, too, is enjoying more success in Serie A than he did in the Premier League, with six goals to his name so far this season. And Zlatan Ibrahimovic, after a disappointing spell with Barcelona, is once again on top of his potentially formidable game. Allegri deserves credit for making consistent performers out of talented players who proved inconsistent on other shores.

Things are not looking so good for Inter Milan, who lie thirteen points below their neighbours. With recent losses to Lazio in the league and to Werder Bremen in the Champions League, the pressure has been mounting on manager Rafael Benitez. Leading up to the match against the German side, Inter had lost four of their last eight games. In the match itself it took them 44 minutes to register an attempt on goal. The humiliating 3-0 defeat means that they will have to settle for second place in Group A, which will be topped, unexpectedly, by debutants Tottenham Hotspur.

The poor form of the Nerazzuri has heaped pressure on their efforts in the Club World Cup. A 3-0 win over Seongnam Ilhwa secured them a place in the final, where a team from the Democratic Republic of Congo, TP Mazembe. await. They will be without midfield maestro Wesley Sneijder, however, who picked up an injury in the fourth minute of the game against the Asian Champions.

Rafael Benitez is under no illusion about the importance of the final. His career, he acknowledges, depends on it: “There is so much talk about my potential replacements, but I am the Inter coach, I want to win this Club World Cup and I’m sure that if I do then I’ll be here for a long time to come.”

That the Club World Cup has become so important to Inter is a sign that the balance of power is shifting back to AC Milan. Benitez is a man under pressure but his employers and the fans should find some comfort in his record against their rivals.

That night in Istanbul – the 2005 Champions League final – springs to mind. Although in this case he has more than 45 minutes, Rafael Benitez will have to mastermind a comeback of similar magnitude if Inter Milan are going to be realistic challengers for the Serie A title this season.