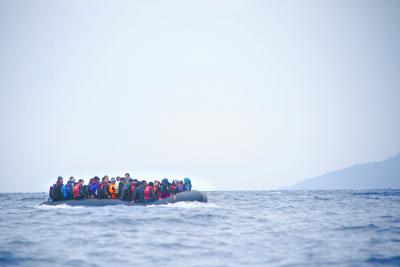 Refugees on a boat crossing the Mediterranean

ROME - Italy is spending only 0.22 per cent of its national income on development aid, well below the OECD target of 0.7 per cent by 2030, while at the same time spending millions on funding the corrupt Libyan Coast Guard accused of complicity with people smuggling, a new charity report discloses.

The DAC Committee - a body of the International Organization for Economic Development (OECD), made up of 29 countries plus the European Union - has set a target for countries to spend 0.7 per cent of their GDP on public development aid (APS) by 2030. To date, only six countries have succeeded - Luxembourg, Norway and Sweden have surpassed the target, while Germany, Denmark and the UK have reached it. Italy meanwhile set itself an intermediate goal of allocating at least 0.3 per cent of their national income for APS by 2020.

As the report, quoted by Il Fatto Quotidiano, released on the eve of the new budget law, explains, “in recent years the achievement of this goal had gradually become less and less realistic,” but it is only “with the preliminary OECD data on public development aid in 2020 that failure was certain.” The document highlights contradictions between Italian Foreign and Defence policy and development aid intervention. It urgently appeals for a change of course “both in the increase in funds for development aid and in the definition of Italian international commitments for the next three years.”

Italy is presently falling short of its own goal by 1.34 billion euros. At just 0.22 per cent of its national income, the country contributes less to foreign aid than Viktor Orbán's Hungary, proportional to its GDP.

Hundreds of millions of euros, paid through taxes, are being spent solely on ‘peacekeeping missions’ and to block the flow of migrants by outsourcing border control to non-EU countries. This includes the so-called Libyan Coast Guard that has witnessed thousands of ships sink on the central Mediterranean migration route without taking action. Since the start of this year alone, more than 1,170 people have died in this way.

The second Conte government had only a few months before the pandemic struck - meaning  development aid was pushed down the list of priorities in the budget law for both 2020 (approved before coronavirus arrived in Italy) and 2021. Francesco Petrelli, finance policy advisor for Oxfam Italia, noted that in recent statements, Foreign Minister Luigi Di Maio has committed to "an increase of 30 per cent of APS resources for the next year and 50 per cent in the next few years, so as to bring us back to the average of European countries.”

There are also problems relating to Italian peacekeeping missions, which this year have cost a total of 1.64 billion euros. This year, the Libyan Coast Guard has received 10.48 million euros from Italy (2.2 from the Foreign Ministry and 8.3 from the Ministry of Economy and Finance) - an increase of half a million compared to 2020.

Oxfam stated, “this year, the Libyan Coast Guard, while continuing to kill migrants along the central Mediterranean route, has already sent over 26 thousand desperate refugees back to Libyan concentration camps. It was around 11 thousand last year.”

In addition to this 'mission', the government has allocated 206 million euros to naval missions in the Mediterranean and Libya in 2021 alone, none of which includes search and rescue tasks at sea. 96 million euros will go to 'Safe Sea' (17 million more than last year), 39.7 million to ‘Irini’ (an increase of 15 million from 2020), 46.8 million as bilateral support to the Libyan authorities and 14 million to ‘Sea Guardian’.

“Every year,” explains Petrelli, “the missions approved by the government around May-June or even in July as happened in 2021, come to parliament to be discussed when a large part of the funds are already disbursed.” The charities have therefore requested the Draghi government to present the individual missions much earlier, within the first month of the new year, so that both parliament and the public have enough time to debate the proposals and revise - or as in the case of support for Libyan Coast Guard, possibly revoke - them if they deem necessary.

Following the withdrawal of NATO troops from Afghanistan, including Italian ones, the government has established an amendment to the mission resolution - the 120 million euros that would have been spent on Afghan security forces will be reallocated. “It is essential that Italy also does its part,” concludes Petrelli, “by allocating these resources to the reception of Afghan refugees and to guaranteeing Italian participation in the implementation of EU and international humanitarian response initiatives to the situation in the country.”