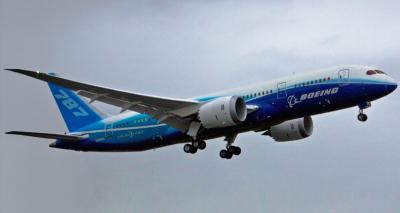 ROME - The root of an issue found in Boeing 787 ‘Dreamliner’ aeroplanes has been traced back to faulty components provided by Leonardo’s ex subcontractor Manufacturing Processes Specification Srl (MPS), writes Il Fatto Quotidiano.  Leonardo, one of the world's largest aerospace defence and security multinationals, suffered a seven per cent drop in stock Thursday as a result.

The Leonardo group, 30 per cent of which is controlled by the Ministry of Economy, builds the aircraft fuselage in its Grottaglie plants in Puglia. The issue that Boeing encountered involved titanium parts that were weaker than they should be on 787s built in the past three years.

"There is an investigation underway, but we have found that this does not pose an immediate threat to the safety of the fleet currently in service," said a Boeing spokesperson.

MPS, also qualified by Boeing, is a Brindisi-based company first known as Special Processes and went bankrupt in 2018. "The aforementioned subcontractor is under investigation by the judiciary for which Leonardo is an injured party and therefore will not assume potential charges in this regard,” a Leonardo spokesman said. “Furthermore MPS is no longer Leonardo's supplier.”

The 787 Dreamliner is the most technologically advanced aircraft in the Boeing fleet, built with composite materials to make it lighter, therefore reducing fuel consumption.