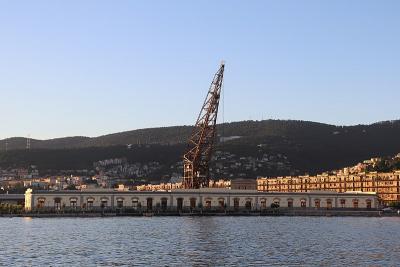 TRIESTE - Dock workers took to the streets to protest the compulsory Green pass and threaten mass strikes from Friday - the day the law is due to come into force, say port authorities. The president of the Port Authority of the Eastern Adriatic Sea, Zeno D'Agostino, has threatened to resign if an agreement to exempt port workers from the Green Pass is not reached before then.

In Trieste, as in other ports the Port Workers Authorities state that around 40 per cent of workers do not have a Green Pass and so the Workers' Committee announced that “if the obligation is not withdrawn” in the workplace, “it will block activities.”

Prime Minister Draghi called a meeting with ministers to discuss the problem and underlined the “possible impact of any defections due to the lack of a Green Pass may cause a serious compromise in the operations of the ports” and therefore “equally critical consequences for the sector and for the economy.”

Consequently the government is considering ways for port area personnel to work “without a Green pass” and to have “free rapid molecular or antigenic tests.” The free tests would not be provided by the state but rather the port sector companies are urged to independently find a solution to provide their employees with something equivalent to the Green Pass - in order to avoid "critical consequences" for the sector and its related activities. Companies operating the Trieste port, during a meeting with the region's Prefect Valerio Valenti, said they would be willing to cover the cost of tests for workers until Dec. 31.

The Democratic Party called the Interior Ministry’s response "inappropriate.” Matteo Salvini  to the opportunity to attack the department, saying “ah, then it can be done! And nothing for the other millions of workers? Instead of businesses, the state should be contributing. Inadequate.”