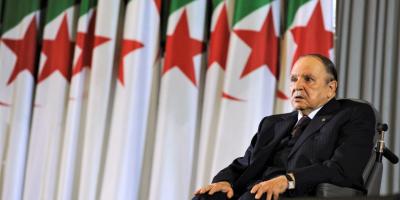 The disgraced former President of Algeria, Abdelaziz Bouteflika, who died at the age of 84 in mid-September, had a low-key funeral, without the honours accorded to his predecessors.

The authorities made plans to hold his body in the People’s Palace in Algiers where mourners could pay their final tribute, but this was cancelled at the last minute. Such a choice reveals the decision-makers’ uneasiness toward one of their own. The man who had his heart set on breathing his last breath as a President, has finally died far from the limelight.

Bouteflika served as President for nearly 20 years from 1999 to 2019 and was a dominant figure of Algerian politics for more than 60 years. But how did this man come to be the chief enabler of the Algerian regime and President of the largest country in Africa?

Known to be a putschist and one of the architects of the Algerian authoritarian regime, Bouteflika played a crucial role, first in the disbanding of the Provisional Government of the Algerian Republic (GPRA), and then in helping Colonel Houari Boumediene concoct a coup d’état in June 1965 to topple the country’s first civilian elected President, Ahmed Ben Bella.

Bouteflika played a crucial role in the disbanding of the Provisional Government of the Algerian Republic (GPRA).

That coup not only enabled the military and the intelligence services to monopolize political and economic power but has also defined the nature of the Algerian state to this day.

Bouteflika, who had first served as Boumediene’s private secretary during the Algerian war of independence in their hideout in Morocco, was first appointed the Youth and Sport Minister. Subsequent to the suspicious assassination of Mohamed Khemisti, the first post-independence Foreign Affairs Minister, Bouteflika took over the position at the age of 26. He remained President Boumediene’s Foreign Minister for 13 years.

Many give him ill-deserved credit for his role as Minister of Foreign Affairs, prompting international sympathy and consideration. They seem to ignore that it was the ultimate sacrifice of 1.5 million victims, during the war against French colonialism, which gave Bouteflika that international aura.

The late 60s and 70s were Algeria’s halcyon days. The country that defeated 132 years of French colonial rule in 1962 became such an inspiration for various liberation movements around the world that Amilcar Cabral claimed Algeria was “the Mecca of revolutionaries,” and even the Black Panther Party had a representation in Algiers.

Though Bouteflika considered himself the natural successor to Boumediene, whose sudden death in 1978 left him a stray soul, the Chairman of Military Security, Colonel Kasdi Merbah, and the military top brass, opposed his enthronization and chose Colonel Chadli Bendjedid instead.

Amid his 21-year self-imposed exile in the United Arab Emirates and Switzerland, Bouteflika was charged by the Court of Auditors for embezzling millions of dollars from the Foreign Ministry budget.

In the 1990s, Algeria’s civil war claimed the lives of more than 200,000 people. It was against the backdrop of this strife between Islamist militants and the Algerian military that Bouteflika negotiated his return in 1994 to serve as the regime’s frontman. But the generals who led the coup d’état against President Bendjedid in 1991, and were responsible for the civil war, rejected his terms.

In 1999, he became the regime’s candidate by default and was elected President. Throughout his campaign, Bouteflika proclaimed “I am all of Algeria,” as he pledged to end the civil war.

In his first term, he promulgated his Civil Concord Law which was a downright amnesty for the war crimes perpetrated by both Islamist militants and security forces. Such measures inaugurated an era of total impunity, as there was no genuine conflict-resolution and no justice.

During his second term in office, he tailored the constitution to gain unlimited powers and to remain in office beyond the two terms limit. He would then be re-elected in 2009 and 2014, with vote results that indicated serious ballot-rigging.

Bouteflika’s long presidency coincided with increasing revenues from oil and gas which, with the advent of the Arab Spring in 2011, allowed Algeria to avoid any major uprisings such as those that erupted in Tunisia, Egypt, Syria, Yemen, Libya, or neighboring Morocco. With perks and fat salaries, Bouteflika was able to use the country’s huge oil rent to buy social and political peace, and ultimately save the regime.

In April 2013, Bouteflika suffered a mini-stroke that impacted his speech and mobility and prompted his humiliating fall from power. His bid in 2019 for a fifth presidential term sparked the February 22 pro-democracy protests – also known as the Hirak, which forced him to finally step down.

An assessment of his political legacy reveals that Bouteflika was “one of the forefathers of the political system, marked by authoritarianism, corruption, and systemic resistance to all forms of change and modernity.”

It should be mentioned that with Bouteflika, “power was exercised in a tribal fashion, based on regional origin and cronyism, a throwback to the backward Algerian feudal society.”

As President, Bouteflika promulgated laws that weakened civil society and undermined every form of political activity, and abuse of power became the norm. According to Louisa Driss Ait Hamadouche, a political scientist at the University of Algiers, “the institutions of the state have never been so weakened, so divided or so discredited.”

Even his official recognition of the Amazigh language was sheer political manoeuvring. It was meant to suppress the agitation of the Kabylia region which is known for its defiance to the government.

Bouteflika’s increasing authoritarianism coincided with his covering up of a widespread high-level corruption, nepotism, embezzlement, and missed opportunities for the country despite its vast oil wealth.

By some estimates, more than a trillion US dollars of oil revenues were either stolen or misspent, even as no government official was ever held accountable for any wrongdoing. The fate of Energy Minister Chakib Khellil, who despite an international arrest warrant issued against him, is still on the run; and Abdelmoumene Ould Kaddour, the CEO of the Algerian national oil company Sonatrach, who is still wanted for his alleged role in a bribery scandal, are a case in point.

For key government positions over the last two decades, Bouteflika picked individuals with no professional experience or credentials to run a modern state. Besides, he despised his fellow countrymen and had only contempt for the “mediocrity” of the Algerians in general.

Moreover, he appointed his youngest brother Said as his Special Advisor and assigned important government positions to his two other brothers. Yet, when he was forced out, and because of the ongoing bickering among the different factions of the regime, two of his Prime Ministers and many of his allies found themselves in jail, and his powerful brother Said has been imprisoned since May 2019.

Lamented by those who benefited from his largesse, he is cursed by millions of others who still cannot fathom his endorsement of the systemic grift that sullied Algeria’s standing. He has also left the oil-wealthy country with poor infrastructure, an economy in shambles, and high unemployment which is still pushing young men and women toward illegal emigration known as Harraga.

In the end, to the consequential question of whether the passing of Bouteflika could bring the beginning of a new era in Algeria, the answer remains in doubt, as the whole Bouteflika-era old guard – with their established privileges and influence – is still ruling the country today.

This article first appeared in Inside Arabia.