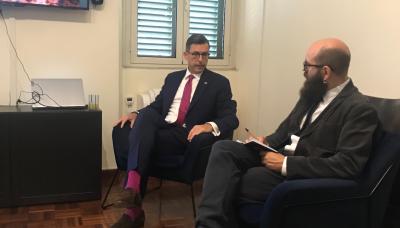 ROME - The decision-making process in Europe is “too old”, according to expert opinions at a conference titled ‘German Elections: Impacts and Opportunities for the Gulf’ at the Euro-Gulf Information Centre (EGIC).

The discussion took place Thursday in a hybrid format, with three speakers and a small audience gathering in person at the EGIC headquarters in Rome; and two speakers and more listeners joining online via livestream.

Coccia outlined the three main possible coalitions that may be formed, with the first two named according to the colour-combination of the relevant parties - the ‘traffic light’ coalition, the ‘Jamaica’ coalition and the ‘grand’ coalition. He posed the question, given traditional parties are declining in popularity all over Europe, is now the time for greater collaboration between smaller parties?

Berg said that “‘volksparteien’- people’s parties - are still very powerful”, but conceded they are “under threat”.

On this subject, Tchakarova noted, “the majority of voters are about 50 years old. First and foremost, they expect continuity, with the focus on socio-economic factors, not security ones.”

Tchakarova added that “digitalisation was a non-topic - even in the middle of this digital revolution.”

“The decision-making process in Europe is too old - much slower in comparison to other major regional actors,” she said. It is a “strategic necessity” for the EU and key European powers to “come up with a concrete approach.”

Tchakarova also noted that there is a “significant security change” in the UK’s new position as a potential “competitor.”

Politi, who is half Italian, half German and co-author of Goodbye, Merkel (2021) said, “there is a Trans-Atlantic consensus that Germany must do more,” he said, referring to “military operations, hard line, etc”. “However”, he posed the question, “are we sure we know what we are wishing for?”

Tchakarova opined, “I don’t expect the new government - whether traffic light, Jamaica or grand, to take risky steps when it comes to decisions related to the security agenda.” She and Berg agreed that the situation is “fluid” and that there is a “feeling of crisis.”However, Tchakarova sees “a lot of potential as well…if one can derive the right conclusions.”

Berg expanded, there is “lots of potential economically in transferring to renewable energy, such as green hydrogen. The next government in Germany will be responsible for pushing for better energy [sources].”

Politi pointed out, “it is evident that there is a Trans-Atlantic community, but to speak of the west is gone with the cold war. There are ‘wests.’” Tchakarova agreed, “the west is increasingly becoming fragmented - countries such as Germany, certain European partners, the US, are not on the same geo-political page…specifically when it comes to the future competition that will take place increasingly in the Indo-Pacific region.”

She continued, “there is no such thing as a comprehensive approach” because precisely “one of Europe’s strengths is its diversity.”

Coccia supported her on this saying that though there is a struggle to agree on long-term European orientated goals and interests, “we can all agree that we don’t want to be squeezed in our geopolitical space by other actors, nor do we want to be a geopolitical backyard due to power moving eastwards.” A “smart approach” is required that is “complementary and not mutually exclusive.”

The topic of the European army was also discussed. Tchakarova thinks it is “a non-starter,” and rather NATO has the actual capabilities to create greater security. Politi advocates for a conclusion to be made. “I’m not afraid of action - 30 years of discussions must come down to something concrete.”

She also highlighted the “loss of momentum” there will be after four to five months forming the German government and then around six months electing the new EU president next year.

The panel concluded that the situation on the ground presents Germany, the EU and beyond, with many challenges - how to engage the public in security matters; how to modernise the decision-making process; how to balance green energy with economic pragmatism; and how to do this while new leaders are being elected. All agreed however that there is “a lot of potential” if the new coalition can “be prepared” for this transitional period.