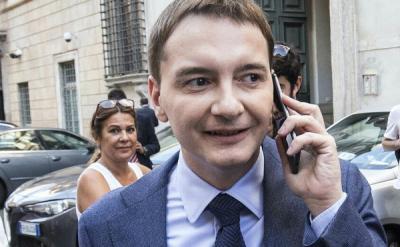 ROME - League leader Matteo Salvini’s spin doctor Luca Morisi has resigned in a sex and drugs scandal after a male prostitute complained that he wasn't paid enough and was given a ‘rape drug,’ judicial sources said.

In a possible act of revenge the day after a party at Morisi’s property in Belfiore, near Verona, one of two Romanian men called 112 and repeated “we’ve been robbed!” He reported that Morisi still owed them 2000 euros and they added he had given them GHB.

Carabinieri followed up the call by searching Morisi’s house and found an amount of cocaine “consistent with personal use.”

Many questions are still unanswered, such as why Morisi trusted the two young men that he allegedly only met a few hours earlier on a paid dating site. According to one of the escorts, in an interview by La Repubblica, they made an agreement with Morisi on the price for a day together - "4000 euros to be paid in two instalments.”

“Morisi also told us that he wanted to use drugs and you pay for these things. He gave us part of the money, but then [...] in my opinion he wanted to cheat us."

Morisi has worked with Salvini since 2013 and is credited for the rapid increase in the party’s popularity, from four to 34 per cent in the 2019 European Championships. On Sept. 23 he announced his retirement from work and political activity for “personal and family problems.” A few days later, the investigation into the drug scandal was made known.

Whether he intended to swindle the two men or not, Morisi’s political career has gone down in flames. It raises questions about what other scandals are going on in the party that in recent years pushed to create a harsher penalty for possession of drugs.