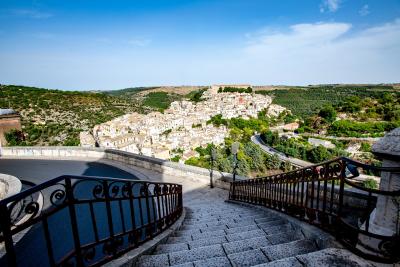 RAGUSA -This Sicilian city will become an open workshop, Friday until Oct. 10, with the first edition of the town’s very own theatre festival, kicking off with a series of workshops, concerts and performances to pay homage to the great early 20th century British set designer Edward Gordon Craig.

Craig’s pioneering work left a deep mark in the face of contemporary theatre between the early 20th century and the 1960s. The festival, ‘Ragusa behind the curtain: Festival of the backstage theatre workers,’ celebrates the 100th anniversary of the publication of “Puppets and Poets” written by Craig in February 1921.

The festival will embrace the whole city of Ragusa Ibla, taking place on the streets and squares as well as unusual and undiscovered places. The event is directed by Vicky and Costanza Di Quattro, both curators of the Donnafugata Theatre - one of the smallest theatres in Europe, with just 100 seats - and guided by the precious advice of Italian-British artist, academic and curator Andrea Cusumano. The main purpose of the event is to highlight all backstage theatre jobs and crafts through exhibitions, workshops, performances, Q&As and open talks.

The festival is delighted to host an exceptional guest -- theatre director Harvey Grossman, who was Edward Gordon Craig's assistant and pupil since the age of 18. He is currently engaged in directing workshops and productions based on Craig’s work, in various drama school, Universities and theatre companies all around the world: from the United States to Belgium, France, England, Sweden and Portugal.

The project is sponsored by the Italian Ministry of Cultural Heritage (funded by national FUS) - Special Projects of the Live Entertainment Direction - and was conceived and produced by “Donnafugata 2000” Cultural Association, which manages the small theatre in Ragusa and by the “ MeNO Association - Memories and New Works” founded by Roberto Albergoni as a spin off of  the festival “Manifesta 12 "(Palermo, 2018) to enhance artistic and cultural values and promoting performing arts’s higher education.

“After a challenging 2020 due to the pandemic,” says Vicky Di Quattro, in charge of the Teatro Donnafugata since 2010 with her sister Costanza, “we wanted to highlight the importance of the entertaining industry and its professionals.”

“The best way to focus on these was to start an ‘open workshop’ like the one Craig led 100 years ago. With its alleys, churches, yards and ancient buildings, Ragusa makes a perfect set to draw new connections among theatre professionals and get the audience acquainted with the many backstage theatre jobs and the way they make live entertainment each time different and unique. For the first time, the creative process will become the actual show.”

"MeNO Association,” says Roberto Albergoni, former general manager of Manifesta 12, Palermo, “was created to promote art and culture in order to draw connections between the tangible and intangible cultural heritage, to enhance new forms of contemporary artistic work and make Palermo and the whole of Sicily a ‘crossroad’ - allowing new opportunities and experiences in the national and international cultural scenario.”

“The participation, the exchange and the co-creation in the entertaining industry wasn’t fully explored yet - until now.”

“With this festival, pre-production activities of live shows becomes a moment of entertainment, in which the audience is involved as spectator as well as an active participant and the backstage theatre workers will be able to exchange views with other internationally renown artists and professionals.”

“Craig’s work is the greatest example of scenic arts and contemporary theatre,” added Cusumano, former drama and scenography professor at Central Saint Martins, Goldsmiths and Rose Bruford college in London. “So, channeling Craig’s ideas and his most famous text Puppets and Poets, we are gathering creatives and professionals working in entertaining industry, to celebrate their skills and focus on their artistic jobs in a series of events open to a wider audience.”

Ragusa is mostly known for Ibla and its Unesco baroque heritage all over the world as well as for being the set of television drama Il Commissario Montalbano. Hence, this festival will be a completely new cultural challenge for the city of Ragusa. Monuments, different corners of the city will host exhibitions, workshops and live shows for the first time. All locations have been carefully chosen in collaboration with the Municipal Administration. The event is spread throughout the city as a “green” pathway allowing the visitors to explore Ragusa by foot or by bicycle and offers a glimpse on the stairways that leads to Ibla.

Alongside Grossman, the programme of musical events will involve leading national institutions such as the ‘Teatro alla Scala’ Ballet school of Milan, hosting fine professionals specialised in the creation of theatrical make-up and hairstyles; and the “INDA” Classical Theater Advanced Training Drama School with professional theatrical costume designers.

Joining the guests of this first edition of the festival, will be established personalities such as the actor, quick-change artist and illusionist Arturo Brachetti; set and costume designer Simone Valsecchi, who have worked on numerous productions for the Piccolo Teatro in Milan, and for independent films with directors Ronconi and Greenaway; Marco Savatteri, author, director, composer and founder of “Casa del Musical”, the only theatre company in Sicily, one of the few in the national scenario, which is able to combine high profile training in performing arts and theatre production.

Also joining the event will be the musicians of Tavola Tonda, a school of traditional European repertoire, folk music and dance, from Southern Italy and Africa. The programme will be enriched by the presence of internationally renowned violinist Giovan Andrea Zanon, accompanied by pianist Giacomo Menegardi, winner of the "WAMozart International Piano" 2020, who will be introduced by Paolo Gavazzeni, artistic director of the “Classica HD” TV channel; and by Enrico Giurdanella who owns the right of the “sound bed”, a bed which plays music through the body of the person who sits on it.

If in the 20th century Craig's extraordinary designs represented avant-garde and taught the world a new way of conceiving the performance, nowadays the industry gives a not to the digital and virtual world. The exhibition ART - Art Rethinks Transformation - will allow visitors to touch on the potential of augmented reality through a widespread virtual collective, accessible with your smartphone. The experience of the "Pedal Theater" of the Mulino ad Arte company is linked to the theme of ecological sustainability and as well as new ways of operating the lighting systems: bikes are installed instead of armchairs, while lights and audio are powered by spectators when cycling.