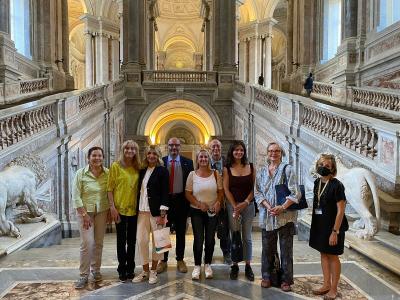 CASERTA -"The wines of this district are excellent both white and red, and are some of the best in the Kingdom, for their quality and nature, as well as for the grateful sensation they awaken in the palate. They go by the name of Pallarelli, and are highly esteemed at lunches.” Thus the Bourbon Kings of Naples, among the most important monarchs in Europe, described the Pallagrello wine, from the vine of the same name, which they planted in the gardens of the Royal Palace of Caserta, in the Bosco  (wood) di San Silvestro, to be able to produce it directly in the ‘Royal Delights.’

So much was their passion for wine, that they wanted the white and black Pallagrello, as it is known today, in the royal vine. And if he had prestigious guests, to make a good impression, King Ferdinand IV would give him the Pallagrello, the most precious gift: the wine of the ‘Vigna del Re.’ When the Kingdom fell, the kings died, the vineyard of the Royal Palace of Caserta in the Bosco di San Silvestro died. Abandoned by men and by the gods.

About four years ago the Royal Palace of Caserta, trying to revive the monument not only as a gigantic museum, but as a living palace, rediscovered the existence of the Vigna della Reggia in the wood of San Silvestro, next to the more choreographic and well-known one of the Ventaglio, and immediately tried to revive it by entrusting it to an external concessionaire, a quality winemaker. It was the then director, Mauro Felicori, who decided that the Royal Palace should relive in all its functions, “return to being a living home.” The challenge was epochal.

The Royal Palace of Caserta, directed now by Tiziana Maffei, is a World Heritage Site, included in the list protected by Unesco and the experiences of grape varieties in Unesco heritage monuments can be counted on the fingers of one hand.

So the wager of the rebirth of the Vigna della Reggia in the San Silvestro wood was a cultural and social challenge, but also a bureaucratic one. A revolution in the habits of the public administration that no longer had to preserve or at the most protect, when it happened, but also produce.

"The ancient Bourbon vineyard comes back to life thanks to this ambitious project of which we will soon see and savor the fruits - explains the director Maffei - The Royal Palace of Caserta, born as the highest representation of prestige of the new kingdom of Charles of Bourbon, completed in its structure from the Bosco di San Silvestro, as well as many of the Bourbon royal sites, was conceived as part of an articulated territorial production system.”

“Nothing has been left to chance and the magnificence of this cultural, historical and artistic heritage is made even greater by the concrete value it had in everyday life for the royal family but also for all those who lived in this area.”

“One of the purposes of the Vanvitellian complex is to recognize this important heritage and enhance it, giving space to the creative possibilities inherent in these fertile places, in the spirit of the contemporary museum that recognizes the potential of an institution increasingly at the service of society and its sustainable development.”

The challenge in practice, after four years, has been won. The concessionaire, the "Tenuta Fontana" winery, based in the village of Pietrelcina, in the Sannio, the homeland of Saint Padre Pio, has rediscovered, planted, lovingly cared for, every day, the Pallagrello vine, the ancient Piedimonte, and the vine is slowly reborn. Becoming a grape of which the harvest began for the first time since September 25th, with a ceremony on site, in the presence of authorities, experts, Italian and foreign journalists.

It was an incredible challenge for the company and for the Royal Palace, as underlined by Mariapia Fontana and Tiziana Maffei, but the Royal Palace of Caserta, the only one in the world to face this adventure, won as well as the commitment and the stubbornness of Tenuta Fontana.

The original vineyard was the one that served the tables and the royal cellar and had an extension of about five hectares, right in front of the Casina di San Silvestro, in the wood of the same name.

The other known royal vineyard was that of the Ventaglio - so called because they were vineyards of different grapes, in a fan-shaped vineyard - which had a more representative, choreographic / monumental value. Over the centuries, the forest has absorbed much of this extension and there is only one hectare of free land left, right in front of the Casina's entrance gate.

And it is precisely that hectare that has been entrusted to Tenuta Fontana, which has cleaned up and relaunched it.

“The forecast is of a thousand bottles produced, at best,” explained Mariapia and Antonio Fontana, “it would already be a great achievement. But our main goal was to revive the vineyard. And we succeeded. We are aware of how important this goal is.”

To help them in the careful and difficult work of rebirth of the Bourbon vineyard are two of the best professionals on the national market - the Florentine oenologist Francesco Bartoletti, and the Livorno agronomist Stefano Bartolomei. Before them they had tried in a Unesco site, to recreate an ancient vineyard, in the mythical Roman city buried by Vesuvius - Pompeii. A first concrete step to revive the real delights of the Kings of Naples.