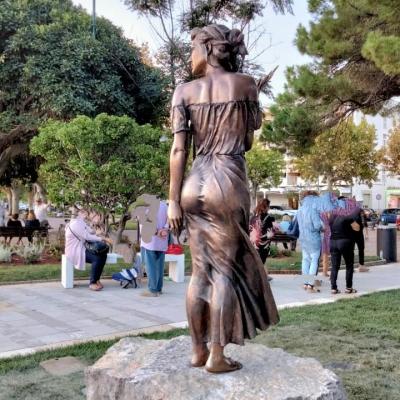 The questionable statue by Emanuele Stifano

SAPRI - Controversy has broken out over a statue representing a female literary character, recently unveiled in the province of Salerno by the leader of the 5 Star Movement (M5S), Giuseppe Conte. The artwork shows the woman dressed in a thin dress that reveals most of her body.

The bronze monument was commissioned to represent the subject of a poem by Luigi Mercantini, “the Gleaner”, a nineteenth-century peasant woman in charge of gleaning wheat. However, it was the artist's decision to highlight the shape of the woman with a ‘transparent’ dress that sparked discussion. Some politicians have condemned the work, while local administrators insist on defending it.

“It is an offense to women and to the history that it should celebrate," MP Laura Boldrini wrote on Twitter. “But how can even the institutions accept the representation of the woman as a sexualized body? Male chauvinism is one of the evils of Italy.”

Her party colleague, Monica Cirinnà, described it as “a slap in the face to history and to women who are still only sexualized bodies. This statue of the Gleaner says nothing of the self-determination of the one who chose not to go to work to take sides against the Bourbon oppressor. Let it be removed!”

The sculptor, Emanuele Stifano, defended himself on Facebook. “I am stunned and disheartened by what I am reading,” he wrote. “I have been accused of all kinds of things that have nothing to do with my person and my history.”

“When I make a sculpture I always tend to cover the human body as little as possible, regardless of gender. In the case of the Gleaner, since it was positioned on the seafront, I 'took advantage' of the sea breeze that hits it to give movement to the long skirt, and thus highlight the body.”

In response to those who object to the decision to highlight her form, he said, “the anatomy was not supposed to be a faithful snapshot of a nineteenth-century peasant woman, but rather to represent an ideal of woman, to evoke in her the pride, the awakening of a conscience, all in a moment of great pathos.”

The mayor of Sapri, Antonio Gentile, sided with Stifano and praised the statue. “It was made with skill and impeccable interpretation by the Cilento artist,” he said. Gentile personally invited Conte to inaugurate it.

While there have been calls for the statue to be removed, there is also plenty of support for the artist, hence the debate continues.