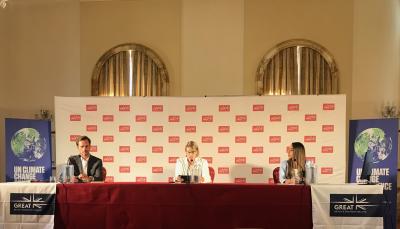 ROME - The British ambassador to Italy, H.E. Jill Morris, who held a press conference for COP26, has called the event a "final sprint" in the race against climate change. At the press conference in her residence, the Villa Wolkonsky, Ms Morris also emphasised the importance of working together, referring not just to Italy and the UK - co-hosts of this year’s conference - but also the wider world.

"For the first time,” said the ambassador on Friday, “it is clear to everyone that the climate is intertwined with many central topics for politics, including finance, economic development and agriculture.”

“Much has been achieved in recent months. But Italy and the United Kingdom, strengthened by their respective G20 and G7 leaderships and our partnership for COP26, are ready for the final sprint: we must do everything possible to leverage this willingness, in Milan, Glasgow and beyond - to keep up the momentum in the fight against climate change.”

Making up the panel in Villa Wolkonsky were spokesperson for the UK in Italy, Pierluigi Puglia, Youth4Climate ambassadors, Federica Gasbarro (in person) and Serana Bashal (online), and the British Consul General in Milan, Catriona Graham (online).

Serena Bashal spoke via livestream video to detail the three main outcomes she hopes will come from COP26. The first was accountability, saying that if targets are not met, “we will pay with our lives.” Secondly, she stressed the need for a “change to green fuel as quickly as possible” and third, “climate empowerment,” saying “all ages should be educated and trained to participate in climate action.” Bashal concluded, “COPs are key events, but what matters most is what comes next...we young people are losing our futures.”

Gasbarro, who has campaigned with Greta Thunberg, listed her priorities for the conferences. She said, “finally, for the first time in history, the youth have a voice” and emphasised the significance of the “new generations” in averting this “existential crisis.”

The 26-year-old believes that the rules must be “stabilised” and we need “resilient models” to effect change and support the economy. She added that there must be “financial support for developing countries” who don’t have the means to take action.

“We can still write the ending to this story - but COP26 is our last chance. The problem is uniquely our own.”

After the speeches from the youth ambassadors, Catriona Graham spoke via livestream about Milan’s Pre-COP events, which will take place in ‘UK House’ - Villa Necchi Campiglio in the city centre - with support from partners such as The British Council and the FCDO. Similarly to Gasbarro, Graham emphasised that the road to zero emissions by 2050 is not only the right thing to do but economically important and made reference to Boris Johnson’s ‘10-point plan’ for a ‘green’ industrial revolution. Graham also drew attention to the European and the Global Green Investment Summits happening next month.

The Pre-COP summit will run Thursday to Saturday, offering states, international organizations and NGOs the opportunity to discuss key political aspects of COP26. Youth4Climate will take place from Tuesday to Thursday - it will bring together 400 young exponents of youth movements from all 197 countries of the world who have signed the UN Convention on Climate Change (United Nations Framework Convention on Climate Change - UNFCCC). They will participate in working groups with other young climate activists and develop concrete proposals for the decarbonisation of the economy that will be discussed with the ministers present at the Pre-COP. The main discussion between the young delegates and participating ministers will happen on Thursday.