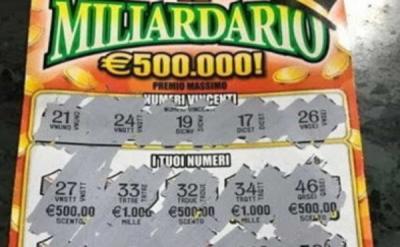 NAPLES - The pensioner who made national headlines after a tobacconist allegedly tried to steal her winning scratch card finally claimed her 500 thousand euro prize money, after authorities recognised that she was the legitimate winner. Her identity has not yet been revealed and Italian media reports have been conflicted about her exact age, which has ranged from 69 to 85.

According to the Customs and Monopolies Agency, the Office of the Prosecutor has stated, "the investigations leave no doubt as to the traceability of what was seized to the offended person", therefore the elderly Neapolitan lady who purchased the ticket will be able to collect what she is owed. The director of the agency, Marcello Minenna, expressed "deep satisfaction for the positive evolution of the affair.

“The institutional collaboration between the Excise Agency, Customs and Monopoly, the Carabinieri, and the Judicial Authority as well as the concessionaire Lotterie Nazionali Srl, has produced an excellent result and I am particularly happy for the Neapolitan lady, buyer of the ticket, who in these days has entered the hearts of all of us.”