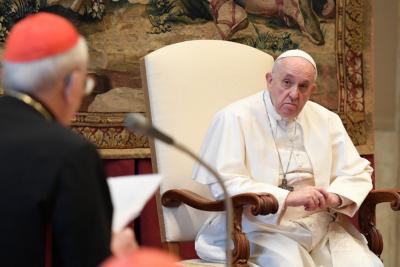 BUDAPEST - Pope Francis has kicked off his four-day tour to central Europe with a warning against the anti-Semitism, which he says is “still lurking in Europe.” The pontiff spent about 40 minutes talking with the President of the Republic of Hungary, Janos Ader, Prime Minister Viktor Orban and Deputy Prime Minister Zsolt Semjen during his one-day visit to Hungary, before continuing to Slovakia where he is currently.

The Pope and President Ader primarily discussed the role of the Church in Hungary and spoke in defence of the family.

Meanwhile, the spokesman for the Hungarian prime minister reported that Orban presented the pope with a copy of the letter that the Hungarian king Béla IV wrote to Innocent IV in 1250, in which he asks for the help of the West against the warlike Tatars who threatened Christian Hungary.

Following the meeting, the pontiff went to Heroes’ Square to celebrate Holy Mass. During this he made the following speech: “This I wish you, that the cross is your bridge between the past and the future. Religious sentiment is the lifeblood of this nation, so attached to its roots. But the cross, planted in the ground, in addition to inviting us to take root well, raises and extends its arms towards everyone: it exhorts us to keep our roots firm. [...] My wish is that you are like this: grounded and open, rooted and respectful ".

In front of the Ecumenical Council of Churches and a number of Hungarian Jewish communities, Francis went on to say that "every time there was the temptation to absorb the other, it was not built, but destroyed; the same is true when we wanted to ghettoize it rather than integrate it. How many times in history has this happened? We must be vigilant and pray so that it does not happen again. And commit ourselves to promoting together an education in fraternity, so that the outbursts of hatred that want to destroy it do not prevail. I am thinking of the threat of anti-Semitism, which still lurks in Europe and elsewhere. It is a fuse that must be extinguished”.