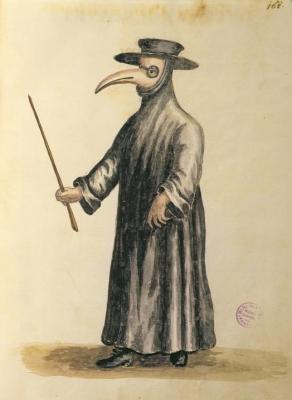 VENICE - The EU Digital Covid Certificate (commonly referred to in Italy as “the Green Pass”) is not such a novelty as people tend to think. The Venetian Republic was issuing them as far back as the 16th century when the bubonic plague was sweeping through Europe.

The Plague, in its various versions, including the infamous Black Death, was recurrent throughout the Middle Ages and the Renaissance, with devastating effects every time. The death rate was high. In the mid- 14th century one epidemic is estimated to have carried off 25 million victims, the equivalent at the time of a third of the entire European population.

There was no known cure and today we tend to think that the general attitude was fatalistic. We believe that this horrific disease that produced disfiguring pustules and a slow, suffering death was seen as a punishment from God for which there was no remedy. This was not, however, the case.

Five centuries ago, as governments struggled to cope with terrified decimated populations and the resulting famines, riots and unrest, the Venetian Republic was a leader in tackling the problem, as demonstrated in the exhibition  “La Pandemica, una Lunga Storia: dalla Peste al Covid-19” (Pandemia, a long history: from the Plague to Covid-19)  currently running in the Medical Museum of the Scuola Grande di San Marco, the former seat of the St. Mark Confraternity, a lay charitable institution.

Although the origin of the contagion was not traced to sea-bourne rats – or rather the fleas carried by the rats – until the 19th century, the authorities in 16th century Venice had realised that ships coming in from foreign ports were a dangerous source of infection. The Venetians were the first to issue an official health pass that allowed certified infection-free outsiders to enter the city, and to bring in quarantine restrictions. Foreigners could not enter Venice unless they had the health  pass, which attested that they came from a plague-free country or port.  Falsifying or carrying a fake document brought severe penalties that could even lead, in certain circumstances, to the death sentence.

Since the Venetian economy depended almost totally on trade, cutting off free movement between peoples would inevitably lead to a drastic drop in state income. The Venetian merchants were fully aware of this dilemma and embarked on a precarious balancing act between attempting to limit the spread of the disease without totally severing their livelihood's lifeline.

Isolation was introduced, or, to use a modern term, “lock down”. Social life ground to a halt. Businesses were closed, as well as taverns, gaming houses and hostelries. Churches services were no longer held. Carnival festivities were banned. The rich fled the city to their infection-free country estates, while the poor remained in confinement in their homes. Plague victims and their families were subjected to house arrest. Health ministers were appointed. Doctors treated the sick in special protective gear, including“isolating” clothes consisting of a thick ankle-length robe, gloves, boots, a wide-brimmed hat and a face mask with glass windows for the eyes and a long pointed bird-like beak stuffed with herbs, that was supposed to keep the contagion at bay.

The Venetian Senate introduced the concept of quarantine. The first Plague Hospital was set up in 1423 on the St. Mary of Nazareth island in the lagoon, where the name was soon corrupted into “il Lazzaretto”, afterwards known as the Lazzaretto Vecchio when it was flanked by the neighbouring island, called the “Lazzaretto Nuovo”. Plague sufferers were isolated from the rest of the population on Lazzaretto island, while their families and close associates were lodged on the nearby  Lazzaretto Nuovo as a precautionary measure. At the height of the epidemic of 1575 an estimated 8 to 10 thousand agonizing patients were housed on the Lazzaretto Vecchio, with very little medical attention. Some fifty years later, the Venetian republic decreed that arriving ships crews and passengers all had to stay on the Lazzaretto Nuovo for a 40-day period, or a “quarantena”, to ensure they were not carrying the infection.

Without vaccines there wasn't much in the way of cure and most stricken with the disease died. Vinegar was used as a disinfectant and the clothes and belongings of dead victims were burnt.

However, modern experts estimate that the pandemic in Venice was finally overcome through the application of the two measures adopted by the Serenissima: isolation and quarantine.

The exhibition is part of the 1600th anniversary celebrations for the foundation of Venice, officially (if approximately) dated to 421 AD.